Night Watch: PYONGYANG – Reuters reports that the Pentagon has just activated its ground-based missile defence system in anticipation of the expected launch of North Korea’s long range ballistic missile Taepodong – 2. It’s operational range is unknown but it has been widely reported it could reach the west coast of the United States or at least Alaska. [Swissinfo]

Speaking on condition of anonymity a Pentagon spokesman said, “It’s good to be ready.” Eric Ruff, the Pentagon media secretary stated, “We have a limited missile-defence system… We don’t discuss the alert status.” There has obviously never been a more immediate reason than right now. Even if the U.S. is not the target, missiles, of any range, by no means have an absolute history of accuracy, they are noted for going off course. If the missile North Korea launched over Japan in 1998 had hit Japan it would have meant war.

Pyongyang does so apparently just to attract attention in order to increase its bargaining position concerning its nuclear-missile program. But in reality the Six-Way talks Beijing instituted several years ago China never meant to achieve anything beyond the appearance of resolving the issue, in the meantime nuclear and missile exports to Iran by North Korea continued and with China’s silent, unofficial active support. Beijing never really supported anti-proliferation of weapons of mass destuction. They only paid lip service to it. 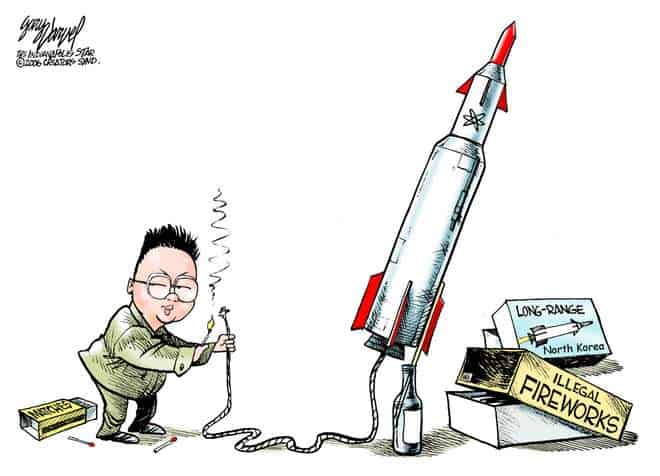 The reason for Beijing’s approval and control of Pyongyang’s exports, that began during the Iran/Iraq War 1980-88 with the Scud missile, is that Beijing knows Iran and the Jihad have the potential of doing a lot of damage to the West-Russia-India. China has often had problems with all three, so instead of viewing radical Islam as an emerging threat, as did Moscow and the West during the 1980’s as an extension of the Khomeini revolution in Iran 1979, Beijing decided to work with it. Which is why I suspect Beijing hates the West even more than Tehran does. Since China has been such a strategic partner with Iran in having North Korea export so much ballistic missile technology, the foundation of Iran’s Shahab missile program, China is rewarded by guaranteed access to all the energy its industry demands from the Middle East and Central Asia.

20 years ago China even sold 50-60 CSS-2 medium range missiles to Saudi Arabia. Each missile has a 2,500 mile (4,000 km) range. Those missiles are a follow-up to the Saudi’s who took part in the Sept. 11, 2001 attacks. Therefore both Riyadh and Tehran are eagerly waiting the test results of the long-range Taepodong-2. Current weather reports from South Korea are overcast and storms for the rest of the week. The guidance systems involved in ballistic missiles are so sensitive it requires ideal weather for launching and even then there is no guarantee of success.

During the Iran/Iraq War both militaries targeted their Scud missiles at each other’s military headquarters and they knew exactly where the headquarters were located. But no missile ever came anywhere near the target. They were lucky if they hit a Baghdad or Tehran suburb and the range was only a few hundred miles. Some of the warheads were also duds. Nothing works as well as advertised.

Even the missile defence system of the Pentagon, the result of constant top-priority testing, has had a mixed performance record, but at times it has worked. If the launch does take place then the Pentagon should make an attempt to intercept it. The selling of ballistic missile and nuclear technology by Beijing-Pyongyang to the Middle East should have been cut off a long time ago. It was never any mystery as to how they were going to be used. Those exports are tantamount to an act of war. The longer the exports are allowed to continue the more Tehran will have to launch and over a wider range.