This has got to be a worse deal than the Indians got selling Manhattan for $24 dollars in beads.

Many people dislike Al Gore, but you have to admit he is a shrewd businessman. He produced an Academy Award winning documentary, “An Inconvenient Truth,” sold the world on trading carbon credits and in January this year, he sold his “dog” TV network known as “Current TV” to the Arab-owned Al-Jazeera network for a whopping $100 million.

Gore’s struggling station would not have brought anything close to $100 million, if Al-Jazeera hadn’t been in the market to reach an American audience, and big Al found a big sucker with deep pockets.

In January, while Al Gore was running Current TV, at the time of sale, it had around 31,000 viewers. Not what you would call a roaring success, but to be fair, it takes time to build an audience. Building an audience is what Al-Jazeera must have been counting on, but they have been inexorably heading in the opposite direction. Even though their channel is available to millions of Americans, their current audience (no pun intended), stands at 13,000.

So their $100 million investment helped them reach the paltry average of 13,000 souls a day. It would be interesting to see the demographics, to see if they are mainly middle-eastern immigrants, but Nielsen ratings are no help to us, because they consider this miserably small audience too few to waste their time on.

Al-Jazeera says they will continue despite the incredibly low audience numbers, because they are “Making large financial investments in programming and marketing.” Yes, we know – $100 million bucks for Al, plus all the salaries of the highly paid journalists and producers they pulled in from all over the US.

The Qatar-based Al-Jazeera had a well-deserved anti-U.S. reputation, but that isn’t what they blamed the poor showing on. Instead, they say they had a bad grand opening last August, and that was the reason.

Al Gore used the $100 million to fill up his plane so he could fly all over the US telling us how bad carbon pollution is for the environment, and now he can go lay on the beach in Santa Barbara with a perennial smile on his face.

Now that’s what I call an interesting wealth redistribution. 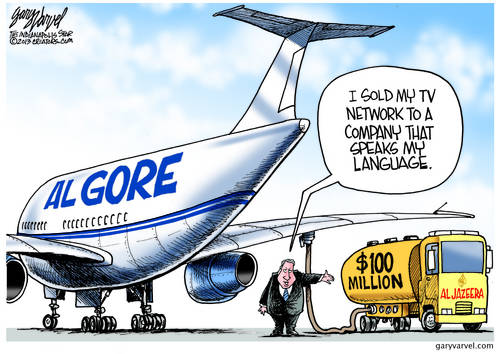