It is very unusual for Britain to experience earthquakes (of any decent size), and extremely rare for two to occur so close together.

The first one happened in Cumbria on December 21, followed by a second near Ripon in North Yorkshire on Monday (January 4). Both quakes were a magnitude 3.6

The largest earthquake to ever hit Britain was in 1931 (magnitude 6.1) and only 11 people are known to have died from earthquakes in Britain during the last one thousand years. 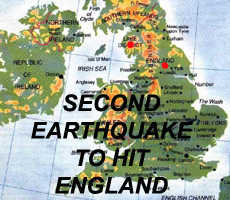 Oddly enough, the British police took part in an “Earthquake Training” exercise last year, which seemed unusual at the time, considering this is not something that should unduly worry Britain.

It makes you wonder if somebody knows something we don’t?

We have all noticed the unusual weather conditions of late and something strange does appear to be happening to our planet.

Could there be some truth to the stories about “Planet X”? Will something terrible really happen in the year 2012?

One thing is certain, if the authorities do know something, we will be the last to hear about it!