Not so long ago, every pregnancy test performed in a laboratory involved killing a rabbit. Happily, better methods were developed and the old rabbit tests, along with the euphemism, “Did the rabbit die?” – meaning, “Are you pregnant?”-faded into history. The new tests were quicker and easier and represented a big leap forward for lab technicians, as well as for rabbits.

New Jersey has just embraced a similar kind of progress by becoming the second state, after California, to pass a law that prohibits product tests on animals when a federally approved alternative exists. Every state should follow suit and mandate the use of available non-animal tests instead of live animals. Every manufacturer – not just those in New Jersey and California-should use the non-animal methods available, whether or not such a law is in place. 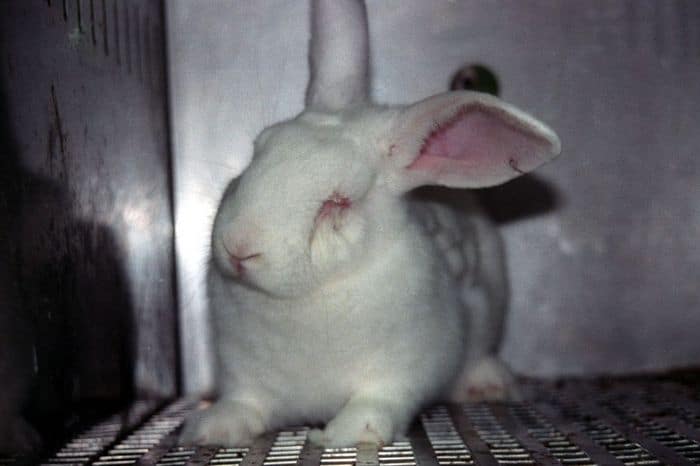 Here’s one reason why: Companies have tested chemicals for corrosivity by locking rabbits into full-body restraints and smearing a chemical onto the shaved skin on their backs. A chemical is considered to be “corrosive” if it eats through the skin, burning away several layers of tissue. No painkillers or anesthetics are used. At the end of the test, the rabbit is killed or “recycled” into other tests.

Chemical corrosivity can now be evaluated using a “human skin equivalent” test called Corrositex, approved by federal officials, which uses a protein membrane designed to function like skin. The results are accurate, it’s quick and no one gets hurt.

There are a surprising number of sophisticated non-animal tests now in use and in development. Unlike Corrositex, not all of them have been given the thumbs up by government officials, but that hasn’t stopped scientists here and around the world from recognizing that these new methods are faster, cheaper and a whole lot kinder. PETA has contributed $760,000 so far to the development of these superior test methods.

Many researchers also understand that humans differ from animals in their metabolism, biochemistry, physiology, genetic makeup and gene expression and that this means that studies on animals can mislead us. This is most obvious in the pharmaceutical arena. Nine out of 10 drugs that test safe and effective on animals fail in human trials. Adverse reactions to prescription drugs that do make it to market – drugs successfully tested on animals – kill 100,000 people in the U.S. every year, making it one of our country’s leading causes of death.

As New Jersey’s new law shows, we don’t have to choose between animals and people. It is really a choice between effective and ineffective science.