Hunters calling a federal phone number to order duck stamps are instead connecting with a different sort of wildlife. A printing error sends people trying to buy the stamps-which are required in order to hunt migratory water birds-to 1-800-TRAMP24 instead of 1-800-STAMP24. Very friendly women answer the phone and invite callers to spend $1.99 a minute to “talk only to the girls that turn you on.”

While there’s probably a government proofreader somewhere thinking, “Oh, duck,” I think hooking up hunters with “tramps” is a good idea. Anyone who kills animals for fun could probably use some help getting a date. 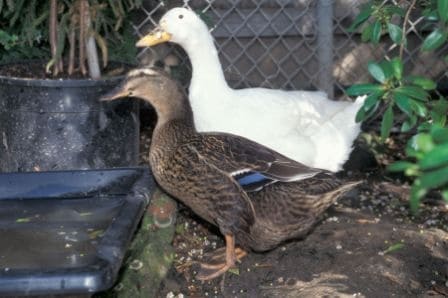 Quackers and Crackers were rescued from a man who had confined them to a small pen without any puddles, clean water or even much food. After some intensive TLC, their true personalities began to emerge. They love splashing in water and playing in mud, and they quickly trained me to spray water on a section of the yard to create the duck equivalent of a sand box.

When Quackers sits on her nest, Crackers guards her and won’t let anyone come near. When she’s off her nest, Quackers will poke Crackers in the rear end to make him take action. It reminds me of some human couples I know. If my dog Choopy tries to steal the ducks’ food, for example, Quackers honks loudly and pokes Crackers in the butt as if to say, “Do something, lazy!” That’s when Crackers swings into action, chasing Choopy away.

To get my attention when I’m in the garage doing laundry, Crackers sticks his head through the dog door and honks at me. And just like people, Quackers and Crackers have their likes and dislikes. They both love tomatoes, which I chop up and dump on the grass. If I put them on a plate, the ducks won’t touch them. They also have favorite people and not-so-favorite people. The latter, usually new visitors, will get chased.

Ducks in the wild are not so different from Quackers and Crackers (although no one is chopping up tomatoes for them). Mother ducks call their chicks to them when danger is near and ferociously defend them against predators. Males and females form monogamous pairs, and some, like whistling ducks, remain together for life, sharing parental duties.

Imagine the pitiful plight of a duck whose lifelong partner suddenly “disappears”-blasted out of the sky by a hunter. It would be bad enough if hunters made a clean kill each time, but many birds are wounded or crippled instead and never recovered.

Duck hunters report an average wounding rate of 18 percent in U.S. Fish and Wildlife Service surveys, but studies using trained observers have estimated that the rate is closer to 30 percent. Even if hunters wound “just” 25 percent of the birds they shoot, that still means that one out of four ducks hit by gunfire suffers a slow, excruciating death.

There are two birds in my back yard who would say that’s too many. Hunting may have been necessary for humans’ survival 100,000 years ago, but today it is just a violent pastime practiced by a small minority of people who think it’s fun to stalk and kill animals.

Really, fellas, isn’t there a better way you can get your kicks? If you need ideas, I know a number you can call for a good time.