For most of us, spending time with visitors we’d rather avoid is an inescapable part of the holidays. While there isn’t much you can do about nosy Aunt Louise, your nit-picking in-laws or your crazy cousin who insists on reciting the same embarrassing story about you every year, there are some holiday guests you can cross off your list-and without any hard feelings: mice and rats.

December is prime time for a rodent invasion. The weather outside is frightful, and with the fireplace-or furnace-roaring and the never-ending spread of food from holiday parties, your home looks positively delightful to chilly, hungry rodents. But before you reach for snap traps, poisons or-worst of all-glue traps, please remember that just like dear Aunt Louise, these tiny creatures feel pain, suffer and deserve to live, even if we’d rather not be around them. 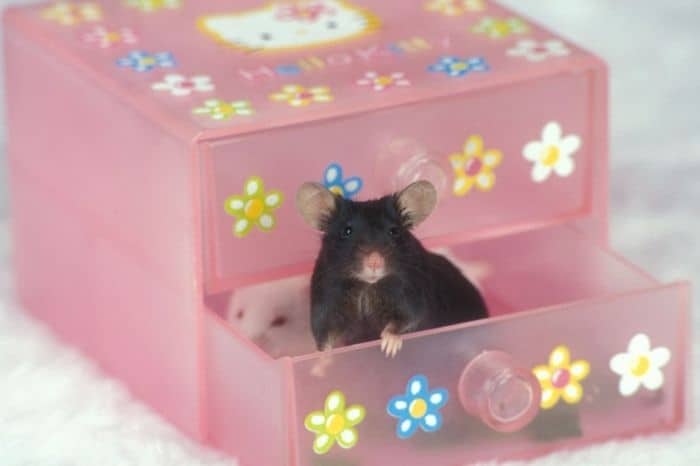 One PETA member’s view of mice was changed forever after he arrived early to his office one morning and found a tiny mouse stuck to a glue trap, shrieking in pain and fear. He gently worked the terrified mouse free, but the cruel trap had already claimed the animal’s left eye and some of his fur. The kind man took “Mousey” home, and after nearly a year, Mousey trusted him enough to take an almond from his hand. Soon, Mousey was climbing onto his hand, running up his arm and nibbling his ear. Mousey would race to the top of his mouse house whenever his new two-legged friend returned from work, keep him company on his desk while he paid bills and sleep in a flowerpot while the man watched TV. Mousey was incredibly lucky-many animals who become stuck on glue traps suffer for days, starving, suffocating and even chewing off their own limbs in an attempt to escape.

Not only is trapping and killing these animals cruel, it virtually guarantees that their friends, cousins, aunts and uncles will be showing up in your living room before you even take the tinsel off your mantel. When a portion of their population is killed off, more mice and rats from surrounding areas will simply move in to occupy the vacant habitat. Any rodents who survive an extermination attempt are apt to have a “baby boom” to replenish the population, and soon the cruel killing cycle begins again.

Thankfully, unlike irritating relatives, it’s simple to keep rodents away-during the holidays and all year-round. The first step to ensure that not a creature will be stirring in your house this holiday season is to seal up cracks in walls, holes in foundations and spaces around doors and windows. Holes as small as a dime beckon rodents like a half-off sale at Macy’s beckons last-minute shoppers, so get out the steel wool and caulking gun and seal up your home tighter than a “don’t open ’til Christmas” gift. Next, make sure your home isn’t a rodent buffet by keeping those holiday cookies, crackers and cashews-and anything else that a mouse might like to munch on-sealed in chew-proof containers. Do the same for garbage, companion animal food and birdseed. Once your house is rodent-proofed, use a humane live trap to catch any remaining mice or rats and escort them to a field or wooded area away from your home. If it’s very cold outside or if the ground is covered in snow, show these tiny creatures some goodwill by leaving a mound of straw and some food to help them get by until they establish a new home outdoors.

Taking these simple steps now will ensure a peaceful holiday season at your home and will give mice and rats the best gift of all-a chance at life.