FAIRLY TRACEABLE, a play by Mary Katherine Nagle, addresses the history of environmental law from a future environmental law class held in 2042; though most of the play consists of flashbacks to major events linked to global warming, including Hurricanes Katrina and Rita in 2005, and the Joplin, Missouri tornado in 2011. The professor of that class, RANDY, played by Jason Grasl, is the story’s protagonist, a half-white Native American whose Native mother is a cashier at Conoco who once had larger ambitions of executive advancement, and father is a writer for a local paper in Joplin, Missouri. 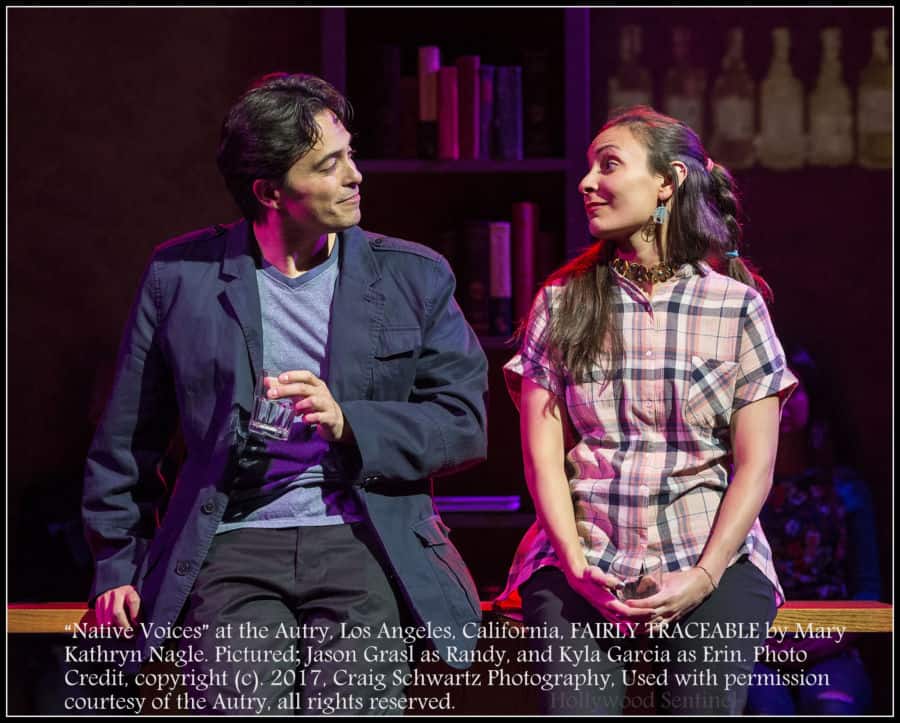 Ms. Nagle is not only a nationally acclaimed playwright, but is also a partner at Pipestem Law Firm, a group of attorneys “dedicated to protecting and enhancing the sovereign rights of tribal governments and improving the lives of Native people.” Her legal knowledge enhances the story, by weaving into the audience’s ‘lecture’ as the environmental law students of the future, key cases and concepts that demark changing ideas about who is responsible for catastrophic losses when an entire system fails to adequately protect the public from the cumulative effect of its own consumption.

Massachusetts v. Environmental Protection Agency, 549 U.S. 497 (2007) was seen as a landmark victory for environmentalists. The State and several U.S. cities sued the EPA in an attempt to force the EPA to set federal emissions standards and curb global warming. The legal issues involved include standing, or the right of the Sate as a sovereign entity to sue; the three standing requirements are 1) injury-in-fact 2) causation and 3) redressability. In cases involving so-called GHG’s (greenhouse gasses), the issue of causation examines whether the injury is “fairly traceable” to the action of the defendant rather than the result of some third party who is not before the court.

These are not the types of ideas which lend themselves easily to dramatization, yet Ms. Nagle succeeds in making dry blocks of legalese come to life in the personal narrative of her protagonist and his quest for, what else, true love and redemption.

Randy’s interest in environmental law is sparked only by his interest in a pretty young fullblood named ERIN, who he follows into class on a whim because he couldn’t get into Sports Law or something else more exciting. Professor Houck is excited to have Erin in his class. Though Erin’s tribe is not federally recognized, she “checked the box” during admission, and Professor Houck spouts off some humiliating clichés about “your people” being “close to the land” and the like. The sardonic message is one of white liberal fetishization of Natives as Exotics. Later, Erin confronts Randy with the accusation “You didn’t check the box!”

Randy and Erin’s love struggles against their own parallel identity struggles, which have inverse trajectories. Randy, raised in a federally recognized tribe, talked about his “Indian-ness” the way you might hear a lukewarm Catholic or Jew describe parentally mandated activities: (A monotone, route recitation of a series of activities-another type of checking off boxes – that begins with “I go to Mass,” “I go to synagogue” or “I go to Pow-wow,” followed by series of related, compulsory, and perfunctory oblations).

Though Randy is not aware of being gifted with special status of belonging, his younger sister, ANNIE, describes to Erin how lucky Randy is to have been born when the entire family was physically closer to the rest of the tribe. While his sister goes to dance every summer, she is just “that girl,” whereas Randy is Randy. They know him. He’s one of them. Perhaps because he was granted an early sense of belonging, his struggle, like his mother’s, is to assimilate to society not as an “Indian,” but as someone who can succeed despite, not because, of his ethnic background.

Erin, on the other hand, belongs to a tribe that was never granted federal recognition. Her father died fighting to gain official recognition. Her people never had a Trail of Tears, were never forced onto a Reservation, and have lived in the Bayou as long as they can remember. Her ancestral homelands are the Pointe-au-Chien. Erin is taking the environmental law class because she sees Big Oil as the Enemy; Randy is torn between his love for Erin and his love for his mother, who views Big Oil as the family’s benefactor and resents politicized Native groups for making her look bad by association.

Katrina, Rita, and the tornado all impact Randy, Erin, and their family members. I don’t want to spoil the plot by giving too much detail away, but I will say that nearly every major character has an “arc” of development that involves confronting their own beliefs.

I was a little worried when I read that the first act would last 80 minutes; the second act runs about three-quarters of an hour. However, I was genuinely engrossed in the performances and ideas, and the time flew by.

The 2:00 performance on March 18 was followed by a panel discussion with artist Cannupa Hanska Luger, whose recent “Mirror Shields” are part of an ongoing display at the Museum; art history professor and curator Nancy Marie Mithlo; co-creator and producing artistic director of Native Voices at the Autry, Randy Reinholz; and Pulitzer Prize nominated independent print and broadcast journalist Mark Trahant. The theme of the panel was about who tells Native peoples’ stories. However, with recent events at Standing Rock and political attacks on climate science, the discussion took on a sense of urgency and addressed a broad spectrum of ideas.

The play first came to my attention through Cannupa’s Instagram account; I met Cannupa in Miami in 2012 when he stopped into my booth at the Select Art Fair, where he was also exhibiting. His work since that time has continued to evolve; he is currently represented by the Blue Rain Gallery and is collected in several museums both domestically and in Europe. Cannupa was born on the Standing Rock Reservation. His Mirror Shields are both art and activism; though he doesn’t consider himself overtly “political.” The Shield protects protestors at the same time as forcing military or police personnel to view their own actions as they target protestors with tear gas or rubber bullets.

The play showed the real impact of consumption; while there have always been hurricanes and tornadoes, the severe weather we see today is more severe, more unpredictable, and more costly than 50 or 100 years ago. Global warming is very abstract to most people; catastrophic weather is not. The panel members asked “How many more people have to die?” More poetically, Cannupa asked “Whose porcelain image must be dashed upon the rocks?” Because it’s not Brown people or poor people we mourn. It’s Princess Diana (or, today, perhaps Ivanka Trump). “It’s something as convenient as this,” Cannupa said, holding a bottle of water. “You can drink the tap water!” shouted a seasoned activist, from the audience, in one of the lighter moments.

There was a palpable feeling of rage over the irresponsible nature of humanity; rage, guilt, despair, and helplessness, that everyone felt: but also the beginning of turning those difficult feelings into a resolve to do better, to leave a planet that is inhabitable for future generations. This is a testament not only to the power of the playwright, but to the performances of the actors and the director: The audience came in expecting a nice Saturday afternoon, and left with a heightened environmental awareness.

About the Autry Museum

Discover the art, history, and cultures of the American West! Located in beautiful Griffith Park, the Autry features world-class galleries filled with Native American art and artifacts, film memorabilia, historic firearms, paintings, and more. Throughout the year, the Autry also presents a wide range of public events and programs-including lectures, film, theater, festivals, family activities, and music-and performs scholarship, research, and educational outreach. The Autry’s collection of more than 500,000 pieces of art and artifacts includes the Southwest Museum of the American Indian Collection, one of the largest and most significant collections of Native American materials in the United States.

The Autry Museum in Griffith Park