Science! True daughter of Old Time thou art! Who alertest all things with thy peering eyes. Why preyest thou thus upon the poet’s heart, Vulture, whose wings are dull realities? How should he love thee? Or how deem thee wise, who wouldst not leave him in his wandering, to seek for treasure in the jeweled skies, albeit he soared with an undaunted wing? Hast thou not dragged Diana from her car? And driven the Hamadryad from the wood, to seek a shelter in some happier star? Hast thou not torn the Naiad from the flood, the Elfin from the green grass, and from me the summer dream beneath the tamarind tree? Sonnet-To Science-Edgar Allan Poe

I took a look at the exhibition at the Harry Ransom Center today, From Out That Shadow-The Life & Legacy Of Edgar Allan Poe. It was exhilarating, but had a gossamer edge, a darker hue befitting its famous author. I learned a great deal about Poe and enjoyed all of the exhibits by way of old books, art and authentic manuscripts. That’s the first time that I have read Sonnet-To Science! It is mounted on a wall and annotations there let you know that Poe believed that science and art were at odds.

I enjoyed all of it, but a few displays were more striking in there revelations about Poe. One wall had art work displayed of original illustrations for some of Poe’s tales of terror. The drawings of Arthur Rackham are appropriately spooky and the curator has organized them cannily around different moods that Poe was trying to project.

Some stories dealt with claustrophobia, such as The Pit and the Pendulum or The Premature Burial, some tackle the theme of a guilty conscience as in A Tell-Tale Heart, while others are tales of hallucination, such as The Masque of the Red Death.

One glass display case had many letters from prominent writers who were influenced by Poe. A letter by Yeats denounced Poe as shallow and hokey, while one from Rudyard Kipling paid homage to the dark bard. Tennessee Williams observed that “creative figures like Poe are battered by a harsh and unfeeling world.” While Walt Whitman saw a very different role for himself as a writer, he acknowledged Poe’s significance.

Much insight into Edgar Allan’s character can be gleaned when studying the glass case with memorabilia relating to the women that he courted. Let’s see…there were letters to Sarah Elmira Shelton and portraits too in little cameos, I believe. There was Sarah Helen Whitman and a home-made valentine to Louisa Olivia Hunter with an original poem. And do not leave out Virginia Poe, who died an untimely death, and was the subject of the haunting poem Annabel Lee.

To get your bearings, you must examine the timeline panel meticulously. One entry is ‘In Richmond, Poe begins writing for the Southern Literary Messenger. In September he is hired as an editor.-1837’ I went over to the General Libraries at UT to garnish my exhibit experience with seldom read writings of Poe. The timeline glues it all together for you and helps you to remember the multitudinous ephemera with markings of EAP.

One might not recall, but had it not been for certain French authors, Poe’s memory may have vanished. Charles Baudelaire revived interest in EAP with his translation of Philosophy of Education. One glass case was dedicated to French writers and artists who were enamored with Poe and Claude Debussy even composed music around the classic, The Fall of the House of Usher. Art work by Edouard Manet and Henri Matisse illustrate themes from various poems and tales. 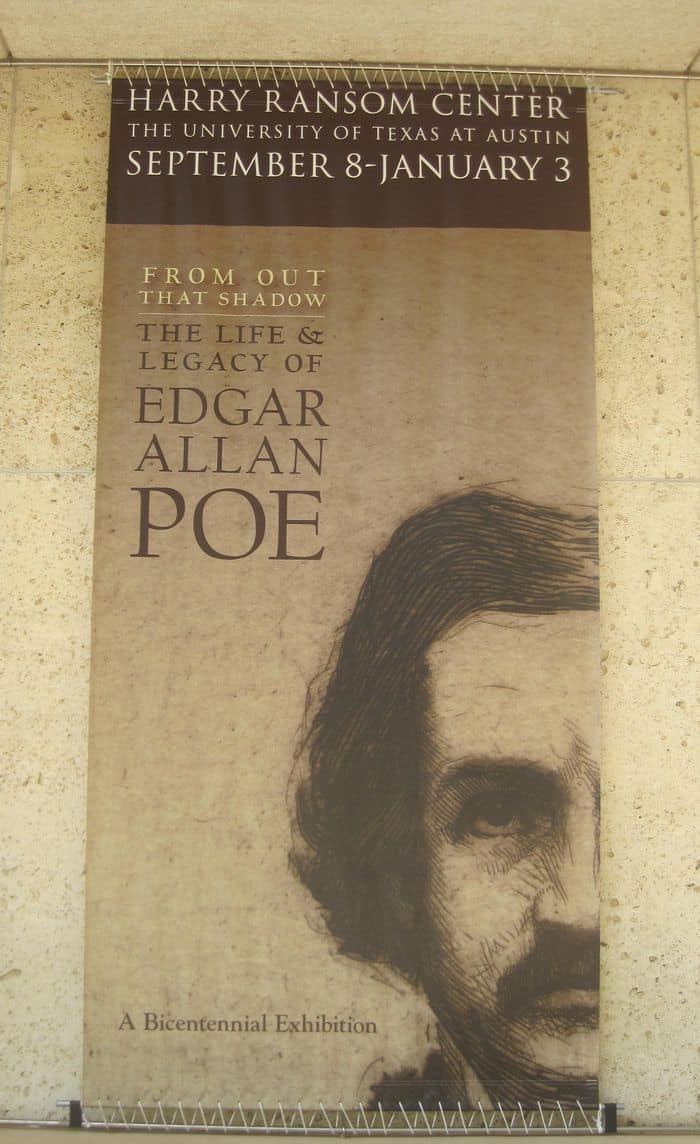 One mounted copy of a newspaper was EAP’s actual obituary written by Rufus Griswald for the Daily Tribune in Baltimore. It’s dated 10/09/1849, the day after the mysterious death of Poe. This is significant because Griswald, literary agent to Poe, belittles him in the obituary and this helped to undermine Poe in the literary community. It took a long time thereafter to resurrect his ghostly gatherings.

There were several other of these mounted newspaper plates; it’s fascinating to see these old newspapers from the nineteenth century! One was of the Baltimore Saturday Visitor with the short story Ms Pound in a Bottle, of which Poe won a $50 contestant prize in 1833. Yet another one of these plates was EAP’s review in the Saturday Evening Post, dated May 1st, 1841, of Charles Dickens’ Barnaby Rudge. He gives it a good review, but exposes a few blemishes in its telling.

The absolute peak of the show was the display of an entire original manuscript that Poe submitted to his publisher, The Domain of Arnheim. Edgar would paste sections of the work on to a scroll to provide a complete edited text (presented in an aesthetically attractive hand) for his publishers. The HRC has an awesome digital pad screen that you can scroll up and down and view the entire scanned manuscript. Poe’s handwriting is so meticulous and artful; we are reminded that things had to be crafted personally by hand in those days.

There are so many things that I have left out, like his actual desk, his various homes, the movie section (with a poster of Ray Milland in Premature Burial), the changing faces of Poe, and the pop culture case with EAP action figures, stamps, comics and a record cover that featured him as a ‘lonely heart.’ But please see this exhibit for yourself by visiting the HRC on the University of Texas campus.

‘A splendid time is guaranteed for all’ who seek out this exhibition of the master of the macabre; yet he is a man who is so misunderstood in so many ways. The skies were balmy and rainy today, yet clouds parted and sunny skies occasionally glistened through the silent, foreboding buildings. Edgar only lived until he was forty, but left us with writings that will outlast all of us.

Reps Are Red, Dems Are Blue – A Little Poesy from the Zoo