The Manila-born singer-songwriter will unveil her new record with a live performance of U TRIED IT the day after its release on Saturday, October 19th, at this year’s Strides for Disability (Strides-for-Disability) in Long Beach for Easterseals Southern California. The event is in celebration of the organization’s 100 years of positive impact in the lives of individuals with disabilities and other special needs.

“I’m thrilled to be performing my brand-new song U Tried It at this year’s Strides for Disability,” said Kocher. “It’s a wonderful cause, and I am honored to be a part of it.”

U TRIED IT was produced by four-time GRAMMY-nominated record producer Leon “RoccStar” Youngblood, who has written and produced hit records for Chris Brown, Usher, Fergie, and Post Malone, as well as having a pinnacle role on VH1’s TV show ‘Love & Hip-Hop Hollywood’. 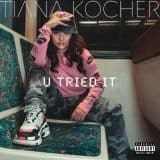 For her new upcoming album, Tiana has collaborated with several GRAMMY award-winning recording artists, including TLC, Faith Evans, Sage the Gemini, and Latin reggaeton J. Alvarez amongst others, as well as multiple award-winning songwriters in both mainstream pop and RnB, which is set to release next year.

Download U TRIED IT on iTunes | Apple Music and on all digital platforms including iHeartRadio, Google Play, Amazon Music, Spotify, Tidal, Xbox Groove, and more via Manila Music this Friday.