Radiohead’s in Rainbows is a Brilliant Blend of Pop and Experimental for The World’s Ruling Art-Rock Band!

In Rainbows is a beautiful record. Okay, that was easy. But the measure of this is that the songs herein are reduced to their lowest terms, purified of any strains of pomposity, and so therefore E=MC SQUARED, is purloined from Albert Einstein’s chalkboard-in-storage, and oddly resurfaces in a new formula-mix for the musical universe that we know as Radiohead.

Things are in flux, random, sounds are utterly organic parts of a cosmic atmosphere, matter is in motion, clouds over our heads hover by racing at a thousand miles per hour…I.E. each time you listen it changes, gets better, expands in scope, and refreshes your perspective with the details of a cascading creation.

The release date was October 10, 2007 but I just turned on and tuned into this band about a year ago. So I’m a little late to the table, that seems to be the story of my life, but you may remember, In Rainbows was first released exclusively on Radiohead’s web site, and remember people could pay whatever they wanted to pay. 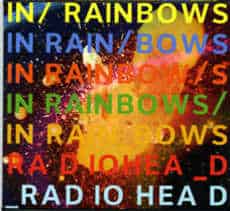 It has sold more than three million copies to date and has kept Radiohead parked safely on the fulcrum of politically correct Art-Rock. You can follow the infinite internet trail of this well documented band, if you like, but I’m just going to tell you what the songs make me feel and what ideas are communicated to me when I perk up my ears.

Things come full circle on the first track, 15 Steps-“How come I end up where I started?” It has a calypso rhythm with eerie electronic stereo textures layered into the basic tracks (bass, drums, and guitar).This is love song about getting played like a yo-yo on a string. “You reel me out then you cut the string.”

The second song, Bodysnatchers, has a distorted guitar, flanged perhaps, and just gets stronger and stronger as seconds tick by. It keeps pulsating, grinding, a clumsy dump-truck plowing down the road, but watching for no one. The message is an out-of-body-experience. Picture a slithering, green Linda Blair spewing yellowish bile, with twisted head and torso, Mephistophilis ranting robustly in the boudoir! Or it could be a Martian body occupation?

In Weird Fishes/Arpeggi (track 4) Thom Yorke somehow mysteriously drops off the earth into the ocean depths and sinks to the bottom of the sea. We are watching from outside of this English Sea World, gasping confoundedly at the Pop Idol, who projects with cartoon verve outta some lost Doctor Seuss book, dropping altitudes like Beau Bridges in a surreal episode of Sea Hunt, since his air-bag has been cut by the obligatory salt-water-taffy bad guy in black.

“I get eaten by the worms-weird fishes-I hit the bottom and escape.” This may be a moody vibe or it could even be death itself, but it seems fun down here where aqua-bubble-ephemera crack and pop and arpeggio guitars splash in the briny deep of Davy Jones’ crusty locker. This is a mood piece, an aquatic soundscape where colorful fish swim by the aquarium showcase and watery tones drench your ears with scaly scales.

Stanley Donwood did the art, as usual, and he is a perfect fit for these English chaps. The credit/lyrics booklet has many futuristic, galaxy of stars type prints throughout. The lyric lines are spread out horizontally across these fiery patterns of color and lava lamp looking lumps of plasma spinning through space. Very red hot cherry red in spots, like intergalactic explosions of gassy matter, meteors, or something…fun to gaze at while listening to the record. The CD cover has the In Rainbows lettering repeated in greens, yellows, pinks, blues, and red against this acid bath print of Mister Donwood. The results are astonishingly apropos in this blithely tight-fit.

Track 7, Reckoning, is an older song that has been reworked; it is my favorite, very chilly, yet enchanting. The rhythm has a locomotive-like motion with splashing cymbals- chug-a-lugging maracas and riffing guitar in a minor key. Keyboards come in one-third of the way through, and a soft spoken middle section with luscious strings is subtly applied against the words: “because we separate like ripples on a blank shore.”

The falsetto Gregorian Chant-like warbles of Thom Yorke are out-of-this-world; a cautionary vision of the end of the world is the secret creed of meaning. This is a shadowy ode to a Grim Reaper of sorts; a Medieval Bard’s gossamer chant to some sickled seeker of souls, The Reckoner. Believe it or not, he is literally singing to Death his very self. I am also able to make an application of this to a UFO experience where Radiohead is taken away in a spacecraft by Roswellian Wee People.

Track 8 is a very weird song, House of Cards; I picture the surreal style of Rene Magritte, say, The Menaced Assassin (1927), but the surrealism is transferred by way of sound projections. It starts off with a little guitar hook, which acts as a monotone drone all the way through the tune. A ghostly humming comes in then the lyrics recite: “I don’t want to be your friend-I just want to be your lover.” Thorne lets his ID loose, gets personal in spots, then gravitates back to abstraction. This provides a good dichotomy; some confessions and some philosophizing as well.

I haven’t seen the video yet, but I bet it is good. The theme is a cautionary pronouncement about the thinness of suburban lifestyles, where materialism can be more of an obstacle to happiness than a limey stone to fulfillment. This is where the House of Cards chimes in, me thinks. “The infrastructure will collapse.” As the song builds up, a textured electronic backdrop fills in the track, accompanied by wails inserted in select spots. Towards the end a California grass fire breaks out, from the look (I mean sound) of things? There is a bumble-bee-buzzing-drone at the end with the words: “Your ears should be burning.” This is all a mystery?

Jigsaw Falling Into Place (track 9) is a faster, punchy rock number that animates you, lifts you off of your chair and on to the dance floor. It’s a finger snapper. There’s a linear unfolding of events, purely random, and it looks like alcohol and partying may have been involved. My favorite line is: “You got a Cheshire Cat grin.” People by nature are foxy, and will try to trick you, if they can. Jonny Greenwood provides us with jangling guitars ala REM, with little clusters of guitar lead/rhythm matrix patterns-grids of accent that spotlight in all the right places. This is an Einsteinian Universe where cause and effect play a very minor role in the greater scheme of things. Things get chaotic at times, almost naturally. The title Jigsaw Falling Into Place refers to the idea that order comes about arbitrarily, randomly, not by the design of Mankind.

The final track is Videotape, a powerful pared-down expression of a man’s last wish to be videotaped, so it can be shown to the Loved Ones after departure. The instrumentation is streamlined with mainly just a piano, vocal, light bass, and what sounds like a rattling metal garbage can lid, or maybe those are wood blocks, I’m not certain. The piano sounds like a loop from Beethoven’s Moonlight Sonata that is sampled, and so the riff just repeats in a drone. It’s a how-to-do-dying kit confession; in this dirge the last day of life is the most perfect day of this storyteller’s life. That is rather ugly but nonetheless revealing about Thom Yorke.

In Rainbows is a concise blend of pop and experimental, the best of both the band’s worlds. Tender loving care was put into every single track; every bit of wisdom at their disposal was used in the construction of these marvelous songs, so that after a year and a half since its release, this collection only improves with each further listening.

Ann Powers with the Los Angeles Times said in her review (appeared on October 13, 2007-Spellbound in a Radiohead prism), “I’m still processing this album, and I’m not alone. Instead of being able to present a solidified opinion before the album became widely available, critics like myself have had to show our doubts, our impulsive judgments and our willingness to admit that we might change our minds.” And so it is still true today, this record has a chameleon-like quality to it. It’s a lizard in the desert that changes colors and jumps out majestically ‘neath a stone to bite you on the chin!