FOR FILM ICON JOHN TRAVOLTA WILL

TOWARDS HIS LIFELONG DREAM OF

Who Has Been Travolta’s Shadow In Over 16

Films, Is About To Hit AC Radio With

“Forever Be Cool,” The Title Track From His

Debut Album Whose Producers Include

Talk about a dream “staying alive”! Twelve years after film icon John Travolta first went gaga over Nick Loren’s (www.myspace.com/nickloren) rough demo for “Forever Be Cool” on the set of the blockbuster “Face/Off,” the charismatic singer/songwriter’s sensual R&B/pop ballad is about to hit AC, Hot AC and CHR Rhythmic stations across the U.S. 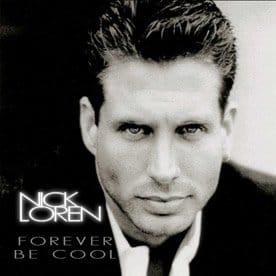 Penned and produced by Chico Bennett, a major force in pop music via his work with Madonna, Nelly Furtado, Hillary Duff and Usher, the instantly seductive ballad by the guy the industry is coining “the McDreamy of Adult Contemporary music” is the title track and second single from Loren’s critically acclaimed debut album Forever Be Cool.

The album is already selling briskly via sites like iTunes, bestbuy.com and Loren’s own label www.clearcutentertainment.com, and on November 18, Select-O-Hits will be distributing it to major outlets like Best Buy, Target and Wal-Mart.

This is all a far cry from 1996, when Loren was an aspiring artist who had gotten his first Hollywood gig as a stand-in for Nicolas Cage in “Face/Off.” No doubt inspired by visions of Travolta’s success as a singer in “Grease,” Loren approached the superstar with his tape. Travolta came back the next day with words of encouragement that set Loren on the road to his ultimate destiny: “You’ve really got something here. You should be doing this!”

The two hit it off, and when Travolta’s stand in on the movie dropped out, Loren assumed the position. Since then, the two have become great friends and Loren has literally become Travolta’s shadow as his official stand-in, double and (often banged up!) stunt double in over 16 films-including donning a fat suit for “Hairspray”! All the while seeding and nurturing his musical ambitions, Loren’ has developed a fascinating dual career, also appearing in small roles in Travolta-starrers “The General’s Daughter,” “Ladder 49,” “Be Cool,” “Wild Hogs,” “Hairspray” and the upcoming “Old Dogs.”

Considering Loren’s Hollywood success, it’s not surprising that some of Tinseltown’s biggest names are agreeing with the album title-once they hear his seductive crooning, they agree he’s going to Forever Be Cool. Travolta himself is like the proud big brother: “Nick’s ability and his range are extraordinary. He is truly a truly gifted and polished musician and vocalist.” Patrick Dempsey from “Grey’s Anatomy” doesn’t seem to mind the appropriation everyone’s taking with his nickname: “I will gladly pass the torch of McDreamy to Nick Loren. I just listened to his album and it is McAmazing!” Hugh Jackman adds, “Nick is tough on the outside and sweet on the inside – just listen.” Halle Berry can’t help falling in love, either: “Nick would sing to me while we were shooting ‘Swordfish’ and that is one sweet and sexy voice.”

“Wild Hogs” can’t keep co-star Martin Lawrence and the film’s director Walt Becker from chiming in, too. Lawrence calls “Fallen,” the McDreamy slo-jam that was Forever Be Cool’s first official single, “off the chain, and Becker marvels at Loren’s multitude of talents, saying, “One minute he’s being pulled off a motorcycle, then all of a sudden he busts out in a high C – a real throwback to the old Renaissance Man!”

Before “Fallen,” Loren, while working on “Old Dogs” in Connecticut with Travolta and Robin Williams, released the tester single “Let’s Make It Real” (one of the three songs on Forever Be Cool penned by the singer) to smaller market radio stations across the country. The phenomenal response to this sensual track kicked the project into high gear.

Loren’s highly anticipated emergence comes after a handful of years of all-too-typical red tape nightmares that happened when he was signed to his first label deal. Launching his own company with his wife Denise and taking a determined DIY approach has given him a much more optimistic perspective: “Finally getting this album recorded and out to the world is just a breath of relief for me,” he says. “It’s so exciting and a long time in coming. When I started all this, I was a single dad struggling to pay the bills and raising my son Tysan, who is now 17. When I first met my wife Denise, she really believed in me and my music, and she was the one who actively made calls to Hollywood and encouraged me to work as a stand-in to support my musical dreams.

“I love the comparisons I’ve gotten to Babyface,” he adds. “I’ve always loved romantic music and romanticism and have always been a huge fan of songs with something to say. Guys like Donny Hathaway, Lionel Richie, Stevie Wonder and George Michael are my inspirations. Lyrically, the big thread running through ‘Forever Be Cool’ is my deep respect for women, which I feel is sometimes missing in contemporary R&B and hip/hop. There’s too much booty slappin’ going on. Women have always played an important role in my life. My mom was 15 when she had me and was almost like a sister when I was growing up in San Diego. My grandmothers helped raise me and they were great role models. I wanted to create an album that makes women feel needed, sexy and most important of all, understood.”

Besides Chico Bennett, Loren collaborates on different tracks of Forever Be Cool with a dynamic mix of veteran and up and coming producers-most notably, Jeeve (Santana, Darius Rucker, The Game) and Claudio Cueni (Immature, 2Pac, Boyz II Men) and fast rising Chicago based studio stalwarts Jay El and Marwan Abdula.

Aside from falling in love at first listen with Loren’s sexy and soulful vocal style and dreamy, easy grooving vibe, listeners across the country are digging his honesty and the overall sense of optimism he brings to his relationship songs. The title track is about being head over heels in love during that first stage of a relationship where everything’s brighter and you feel you can conquer the world. Loren also received an exciting response to his passionate, similarly themed tune “Over Me” at his record release party over the summer at Niki Beach in Midtown Manhattan. While the singer’s relationship with his wife truly embodies these joyful sentiments, Loren has also lived the harder realities of uneven relationships in his life. “I Can’t Afford” is not about the finances of courtship, but the dangers of losing your heart to someone whose nonchalance isn’t in synch with your enthusiasm.

Whether he has personally written a song or it was penned by another writer or one of his producers, Loren’s integrity as an artist shines through; in order to sing it and make the audience feel it, he must first connect with it emotionally and spiritually. “All of these tracks reflect things that I’ve been through,” he says, “and different periods of my life and I will only go with songs that move me and make me feel choked up and emotional the minute I hear it. It either hits me or it doesn’t. The most exciting thing about where I am now with Forever Be Cool coming out is finally knowing that I’m understood as an artist and that people out there are really appreciating the music. I recently got a message from a woman on my myspace page (www.myspace.com/nickloren) telling me that she is going to use my song ‘Mesmerized’ as her wedding song. That’s what it’s all about-listeners and fans feeling me and my songs the way I experienced all of the R&B greats I was listening to growing up.”