Captain Beefheart‘s death hit me hard yesterday. Didn’t know he’d been sick so long. Much of his work is a surprise to me. Much is still fresh as baked bread just out of the oven. Listened to Trout Mask Replica and Doc At the Radar Station yesterday. Wrote on Doc this morning. Doc is his greatest achievement. That’s an opinion, not a fact. Outdid the punks and the hippies in one fell swoop. Redefined art, left ’em on the side of deadend dirt-road. Ya get me drift.

Knew a musicologist’s approach wouldn’t work. Not that I could use one anyway. Listened to the songs on Doc over and over again, and simply typed out whatever words came to mind. Thought this would be pleasing to the spirit of The Captain. Spontaneous combustion on top of improbable improvisation. Again, will please him. So put the record on your record player, and see where you go when reading my captions to a lost genius of our times. 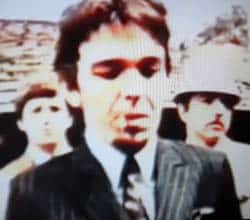 Hot Head an unforgiving cruiser of crunching caches of pushing fire and ornery cross-string crossfire bouncing, snapping, cruelty crashing, careful, it burns. Not music but clusters of panoply texture, bulbous puffs of bleedin’ campy blistering smoke and metal coals of cantankerous circles of gypsy orgiastic spasms of gory dervish flirtatious filament and riptides of cartoon spasm and denunciation of Bugs an’ porky spittle of spasmodic pulverized pulsations. Flocks of blackbirds circle the ranch, let’s get out a here!

Ashtray Heart is, I believe, Beefheart’s ironically charged comment on punk rock. Punkers used the Captain, tried to get too intellectual about his art. Ripped him off and spit him out; he was the originator, the creator of many of these idyllic forms, where experimental jazz, blues motifs mingled with lines about your cheap-motel furniture cluttered in an uncomfortable living room, where no-one likes to live.

Captain’s mad here about being used. Guitars are smoky, shards of glass jabbing the acetate. Gets symphonic at each pillow is touted like a rock, strawberry fields or I am a walrus-great relief section. Goes Howlin’ towards the denouement, bitter wormwood and porcupine mortification stiff as a brick,, drained of heart-felt love by rip-off drag-queens, directionless new-wavers were robbers at the pharaohs grave, took the treasure and high-tailed it to the sorrowful woods where plagiarists dwell.

A Carrot Is As Close As a Rabbit Gets to a Diamond is an instrumental hymn of resignation and harmony, humility and happiness. Beautiful melody and recognition of plight; a contrasting couplet to Ashtray Heart. Anger is drained-chimerical joy is unleased in canticle of insight-key/guitar in second flourish of relief and sparkling enchantment of diversionary romp, in scales, texture and chromatic harmonies against capitulation of bellyache and buffoonery, heretofore mentioned.

Overcooked Delta blues blasts ‘gainst rockin’ frolickin’ blasphemies of anti-jazz, anti-poetry, rants of comic horn emanations, lottery victory against modern art in hot-flashes of insight, tuba bumps and grinds in syncopated, pointed shouting and outrage, Van Gogh’s wheat fields in golden shards of light. Gettin’ away from the devil in the desert, beauty of color and sunset, painting is an outlet of happiness for the Captain. Art work completed when sun goes completely down.

Open guitars, full resounding chords; Sue Egypt a Namibian rant, a flash on the Nile-poetry effusive of unknowns who will be forgotten. Abusers who stomp or tromp o’er The Captain’s grimy grave. Bad Vaggum. Nobodies in a sea of misbegotten Pharaohs. Boats down a dreamy Nile, Cleopatra and Anthony an afternoon pipedream. Greywacke helmets, a solar temple of Userkaf, sand blowing, moon glowing, mummies and hieroglyphs chimerical liquid, wizard spell of textual secrets.

Relief section, voice goes dark-keys portly background noise for side comments on stage of internal vision of ancient purveyors of wisdom, transcendent miracles of priests of Thebes, prepare a mummy wrap to quell the times of insurrection. Back to rocks and stones-avion a flyer in the sky of a mind on fire with perspiration from commitment, radiance of early-morning discovery of charnel bones and chests of gold-pirate-thieves of metrognomes and mellotrons shimmering, fragments of fresco cup of delight.

Brickbats a bummer vision, a cacophony of cascading guit-fiddles crashing in pastiches of dissonance running paint down a canvass of sorrow, wailing by the fireplace-guitars grind like an organ-grinder out of the closet. Bats in Austin-know about it. 45 parts glued together, a hollow collage of expression and despair-a suite of unsettling blast of trumpets from hellish nightmares of psychotropic abuse.

Throat froggy while telling his tale of horror. Poetry is sound and instruments accentuate words in bad trip for The Captain. Gets it off his chest, out-of-his mind, out of his throat, purges vile Lost Weekend DTs of Ray Milland in clusters of staccato accents of strings and snake lines of soprano saxophone-curlicues of smoke-rings suck you dry in Ornette Coleman rapid riffs of electrical eccentric Afro-Cuban fusion of poignant munificence and squalor of putrid pandemonium. Dude needs help-no OD Tent on scene, only jazz giants and blues-boilers.

Dirty Blue Gene busts off the starting line, stops, stutters, starts again. Passion-play, defense against blame or guilt or regret. A million songs in one, bundled in bow a pretty package (if I don’t say myself), words glued to amplifiers, overdubs primal screams regrets panacea of opportunity in tuned guit-fiddles of poetic subconscious nectar-glee of experimental pulse of bang-out catharsis of arty connivance of non-commercial op-art wrapped up wizardly textures of spiraling, undulating polyrhythms of carnal truth and perspicacity of cranial emulations in fractured fairy-tales of underground nature freaks.

Flavor Bud Living quaint chord strains, reflective, studied passages, subtle riffs of consideration, poignant renaissance introductions of melancholy sweetness. Realized soft passages of soothing sound, happiest in simplicity, slithering into pacification of troubled trout-waters, childhood travails or stale bread with Frank. Put another blues record on and dream in peace, but do not go gentle into the night! Rage, rage, the burning of the light!

Guitars and drums weave in and out of a saga that’s a shout-out from a Kung Fu movie palace. Sheriff of Hong Kong longest, coming in at 6’33,” length not a detractor. A dirge about an oriental cinematic queen of the silverscreen, Gloria Swanson in Sunset Boulevard of the far east haunts Beefy, but he goes along for the ride of his life with a waif of a seductive lady, illusive to the mortal eye-exists in a twanging guitar string.

Chants of consternation against winding blasts, shards of grinding noise, smoky bar in a noir flick with Bruce Lee starring as himself-Captain there too, genie in a bottle, goes on a trip to ports of Hong Kong-like Dodge City shoot out in National Lampoon’s Summer Vacation. Comes out in 1980-nobody touches, not Rotten or Rauls or Television Clash or Ramones-pure unfettered pouncing of cantankerous flip-outs and foreplay of multidimensional multicultural mesmerizing monkey business of marmalade munificence and masturbations of moonlight miracles of monstrous mobility. Moonpie magnanimity, don’t ya think?

Making Love To A Vampire With A Monkey On My Knee is a mini-down-home drama, a play where inanimate objects come to life-ponds, lilies, fossils, ferns and rocks animated in a joy-dance of life, bleapin’ freak-out! The instruments remain as a backdrop to a stream-of-consciousness narrative, where the underbelly of romance is mingled with an odd mutation of lyrical animism against comic relief, such as a pile of bones in Hamlet’s contemplation scene with carnie players from the big city of Ellsinore in Denmark, a three hour play of Ionesco’s take on Shakespeare.

The final sixteen bars act as a prologue to the desert spiel, a resolution to a trippy tea cup of despair and reincarnation intertwined in comic sensory compulsion and common sense observation of nature’s mysteries. The juggling act of Vampirical romance is juxtaposed with the chim-chimmery monkey in a juggling of gloom and joy, death and life, resolution and consternation-a Mojave vista-play that titillates our senses, like a prayer of Saint Francis of Asisi.

Beefheart’s death hit me like a sack of rusty nails, a jackhammer pulverized me over the head and left me for carrion crow to munch on for lunch. Influenced me when still impressionable. I study his art. Hope to learn some day. Much I’ve not yet seen or heard. Wrote from the heart. An American original. The creative spark was the end goal, not money or fame. Soak the blues up like a sponge. Possessed by his own poetic vision. Everything carefully orchestrated, yet thoroughly spontaneous. Will be sorely missed. Transformed a generation, who are in the twilight of their glory days, glory days that were defined by Beefheart who successfully channeled the history of American music, it washed like wisdom through his bulbous bones. That’s Captain like? (I’m pooped!)