As for Green Day’s “21st Century Breakdown,” this is Rock Opera for Dummies! Most certainly Joe Strummer is pounding his coffin lid in agony, so he can go over and pummel these schmucks in the kisser. Maximum plagiarism, minimum creativity. Banality, cliched, sickening poetry…all good describers for this paltry project.

Did I detect Ian Anderson of Jethro Tull intonations on the last verse of “Restless Heart Syndrome”? Or is Christian ‘Aqualung’ himself reincarnated? Or perhaps he is a secret priest of the Illuminati? I’m fishin’…

With the anthem “21st Century Breakdown” we are off to the races, but the horse has a bad leg. Sorry, we’ll have to shoot him! “My generation is zero, I never made it as a working class hero.” Then why bring it up? I refuse, on principle, to type anymore of these stupid bumper sticker slogans that ripple through these Greenie rifts. If these guys have a nervous breakdown, I don’t care. I sure hope my piece decreases their unit sales. I never heard American Idiot, and have no intention of ever doing so. This is pure cut-out bin fodder, for sure! Slop for hog farm, no two ways about it.

I know for sure that I am NOT going to watch the video of “Know Your Enemy” ever again throughout all of eternity, and you can extend that time, furthermore. In fact, it ain’t gonna happen. In the video it looks like they are at Gitmo or Alcatraz, from the looks of all the barbed wire, a friggin’ penal pad from Hell, I believe. Does the enemy refer to Al-Qaeda? 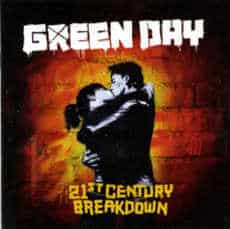 Who knows? It doesn’t matter anyway. And talking about a corny couplet: “Violence is energy, from here to eternity.” Is this a National Lampoon spoof where a Burt Lancaster double rushes onto the beach toting a machine-gun and pointing it at whatsername (Gloria)? Banal, repetitious, cliched, incongruous, I’ll let you choose your weapons of mass-mixed-metaphor. Okay?

“Before The Lobotomy” is a soft, lilting melody that suffers from some shaky lyric lines *(what’s new, this entire project is infected with ‘sick poetry’) like: “Dying, everyone’s reminded, hearts are washed in misery, drenched in gasoline.” Naturally, you’re going to feel bad if your heart is awash with petroleum products. The lyrics are just dumb.

“Christian Inferno” suffers from uninventive guitar playing too, a trivial punk chorus that goes nowhere, and some of the worst confabulations that have ever burned my eyeballs bloody beet red. Maybe that’s where the fire comes in on the cover. “I am the atom bomb, I am the chosen one.” Come on, that’s not profound, it’s just plain fruity!

The first dry run on “Last Night On Earth,” it was a thumbs up. Then I thought, “Have I heard this before?” Then I remembered how John Lennon’s “Isolation” went. The exact same chords, but a slightly different melody. Billie Joe doesn’t sound like he has any real feeling with his phoned-in performance; he sings blandly: “I’m sending all my love to you,” oh really. You chump, you don’t really love her! Just goin’ through the motions. I learned something new however, never knew you could text message a postcard now on your Blackberry.

“Horseshoes and Handgrenades” is a transparent punk parody of the Sex Pistols, all the way from the angry vocal, to the predictable power chords; same old worn out progression with same old thread-bare lyrics. Not worth even quoting them, too stupid. The G-L-O-R-I-A ending is an obvious robbery of Patti Smith’s “Horses.” The stupid use of four letter words has little angst, but is only irritating filler on yet more felonious filler. I never knew redundancy could be all this repetitious? I was wrong. The ‘horseshoes and handgrenades’ must mean like peaceful fun and violent war? Big Deal!

Thanks to Ann Powers of The Los Angeles Times for pointing out the similarity between “The Static Age” to Buddy Holly’s classic “Everyday.” I thought I recognized that melody from an earlier era. Green Day better pray they are not ordered to court for purse-snatching! And what the hell is “Coca Cola execution” suppose to mean? “I can’t see a thing in the video, I can’t hear a sound on the radio.” Banality plus. “See me, hear me, touch me, feel me.” Okay, that’s too close to “Tommy.” I sure do miss it, right about now. Woe, I’m puttin’ it on!

“American Eulogy” starts off with Billie Joe Armstrong’s vocal filtered through a tin can, that subs as an introduction. “Tell me a story into that good night.” Was he channeling “Do Not Go Gentle Into That Good Night” by Dylan Thomas? “The dawn of my love and conspiracy,” huh? Bad choice of words. I’ve taken a fair number of poetry classes in my day, and always made As; this is bad poetry, that plasters a coconut cream pie in your face, then guffaws at your goofy antics. Huh? Watchin’ too many Three Stooges’ shorts, GD?

Part A. “Mass Hysteria” is confusion boats, flurries of words that do not fit right with the meter of the music. There are too many syllables for the music lines. When it drifts into B. with “Modern World” it gets worse. “I’m a fugitive son, in the era of dissent.” This is meaningless. “I don’t want to live in the modern world.” Indeed. Lifted, quasi-Clash staccato power chords on top of empty phrases like: “I want to take a ride to the great divide.” In my heyday I would have tossed any such napkins of my poesy in the nearest waste can, during the time that I was in my ‘Lord Byron Phase’!

I am brutalizing this record. I’m Spartacus in the arena with it. This is fun! Didn’t know I could be so cruel. But who doesn’t like to reap some havoc on the internet (from time to time)? To kick some Rock Star butt through the goal posts. Truthfully, I’ve heard a lot of Rock Opera in my day. This is not a “Tommy” or a “Jesus Christ Superstar,” senator! And Mister Armstrong, you’re no Pete Townsend!

Those are the REAL THING. Maybe Punk and Rock Opera are like oil and water, they simply repel one another. I’m not hearing any real message here neither. Just vacuous *(or better, vacuum cleaner) wordplay against recycled Garage Rock chords. I’m an expert on this *(been in hundreds of Garage Bands), and can see right through Green Day on this one. Go roll one up (“no no no no I don’t smoke it no more”)…back to the drawing board lads!