Donovan will be giving a concert at Munich’s Cuvillieis Theatre as the start of his activities on the Social Web; the performance will be streamed live on Donovan.ie

Donovan is inviting fans and the online community to watch his sold-out concert live on the Internet this Sunday. He will perform his hit songs and cult classics as well as showcasing songs from his new work RITUAL GROOVE as a run up to his forthcoming world tour 2010/2011. Special guest will be talented musician Claudia Koreck, one of the hottest newcomers in Germany.

The show will be streamed live Sunday, January 24, at 8:30 p.m. CET worldwide thanks to the professional live streaming technology and video production of TV1.EU, and a true broadband connection by BT, British Telecom. This World Wide Charity Concert is to benefit ‘Schools Without Stress’ (Germany). Also see the DLF, and the David Lynch Foundation. 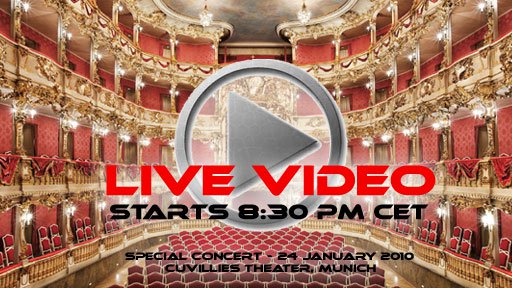 The Link to the Live Stream will be on Donovan’s new Website http://www.donovan.ie/live/. News of the free live webcast concert is also on Donovan’s facebook and twitter page. His fans just love the idea of streaming the concert! http://www.facebook.com/DonovanOfficial & http://twitter.com/donovanofficial.

“Donovan fans worldwide now have the opportunity to take part in an extraordinary concert experience directly from their computers at home. While watching the concert Donovan’s Online Friends can share their experience on facebook or twitter,” says Monty C. M. Metzger, CEO of the Social Media Marketing Agency, Ahead of Time. http://twitter.com/montymetzger

This “Social Media for Social Activism” musical event will support the charity project “Schule ohne Stress” (Schools without Stress) and will increase awareness about the positive effects of the Transcendental Meditation (TM) technique on creativity, intelligence, brain functioning and academic performance.

The legendary folk-rock pop troubadour Donovan began his career as an itinerant folk musician and created acoustic hits like Catch The Wind, Colours, Mellow Yellow, and Buffy Saint Marie’s Universal Soldier. Other megahits include Jennifer Juniper, Sunshine Superman, Hurdy Gurdy Man, Season of the Witch, There is a Mountain, Atlantis, and other beautiful songs, which appeared on later albums, like Sutras, produced by Rick Rubin.

Dr. Donovan Leitch is a Green-Activist and received a Doctor of Letters from the University of Hertfordshire, an honorary medal as “Officer of Arts & Letters” by the French government, and was named BMI Icon in 2009.

Donovan was one of the few artists to collaborate on songs with the Beatles, contributing lyrics and vocals to the song Yellow Submarine. Donovan influenced Paul McCartney, John Lennon, and George Harrison in their guitar styles, and during his career played with folk music greats Pete Seeger, Joan Baez, and Bob Dylan, as well as rock musicians Jimmy Page of Led Zeppelin and Brian Jones of the Rolling Stones.