JANIS JOPLIN (1/19/1943-10/04/1970) IS TEXAS! Had to get that out of the way, because I really believe this is the TRUTH. A few days ago, I was blown away by the great number of images of Janis streaming through my Facebook page; this happens all the time anyway, but it was extraordinarily high this time around. Most popular Rock Idol I’ve ever seen in my life!

Finally, I got around to noticing it was Janis’ 70th birthday, last Saturday, January 19th, so I decided to examine her life and music as critically as I could, suspecting some of the excessive worship could use a bit more temperance. Metamorphosis is the order of the day, but in what direction?

With modest modifications of my earlier position on Joplin’s art, most worship of her as a brilliant genius of a blues singer and Flower Child of an extraordinary order, remain firmly in tact, rock solid as Gibraltar! As I often do, I started off with her Wikipedia page so as to line up my ducks, as far as biographical data goes on this dazzling damsel faring from Port Arthur, Texas. 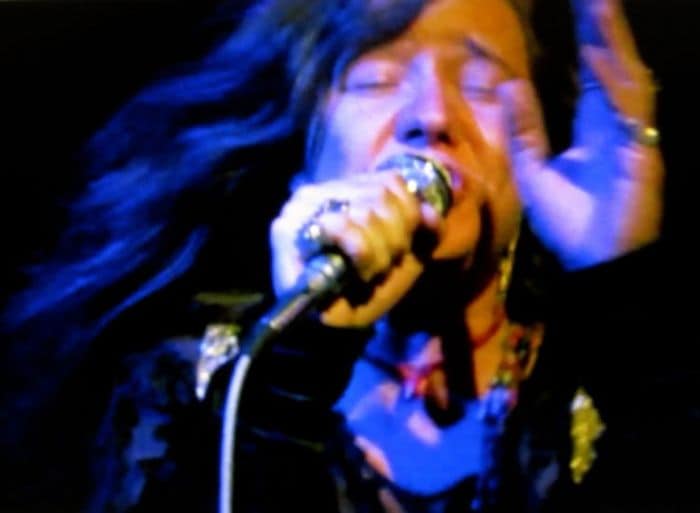 I tried to get the swiftly changing timeline down pat as good as I could, printing out pages here and there, such as the Cosmic Blues Band period or the iconic Pearl Sessions, which sort of act as the final bookend to her life (bits about her heroin overdose had to be looked at too, as painful as it is to do so).

The next thing I accomplished was to view Janis (1973) on Netflix for a second time (in recent memory). I just saw it about two months ago, but this time I paid closer attention and took some notes in a Marble Memo pad I had. After a proper, thorough viewing, I studied some references on the Wiki page once again, then went over to itunes to see if I could find a nice cross-section (an anthology, you might say) of her primary songs. 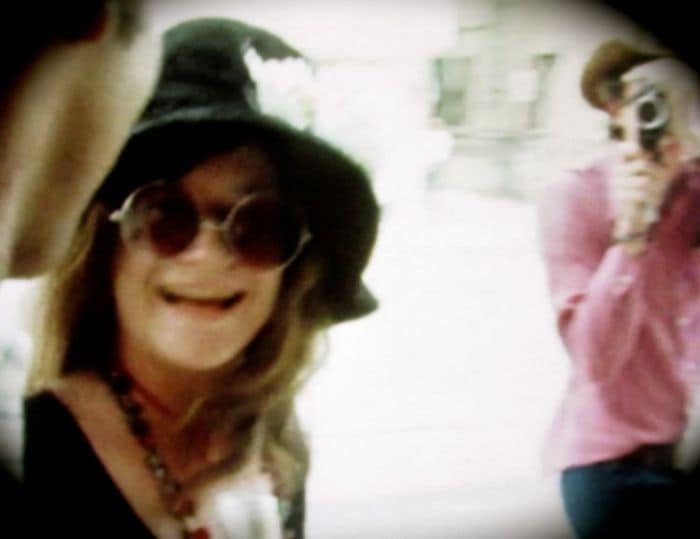 I went with The Essential Janis Joplin, released January 13, 2003 (on Sony BMG MU), with something like 60 songs culled from her 4 studio albums and various live performances. This is a nice package, but there’s no liner notes or references as to context of content; it requires that you do all the heavy lifting, sorting out when or where the tracks came to life in her amazing career.

Well, it was a good exercise in researching her total catalog, and helped me to get better control of her body of work, which isn’t all that large anyway. So here we have one the biggest Rock Stars in the History of Pop Music, whose work has never been carefully archived and documented with descriptive entries of identification, then packaged in one of these well-organized and produced box sets (with actual authoritative analysis), that ought to be an example of a final definitive statement, representing Janis’s catalog, in total. 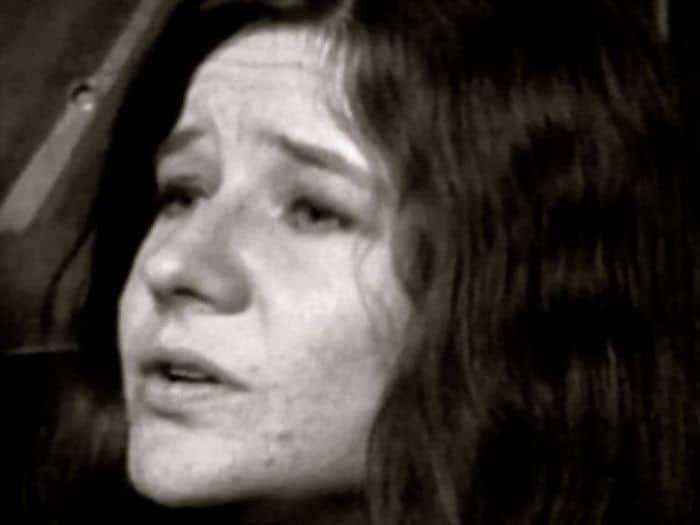 It seems as if this goal has been achieved with the Pearl Sessions, so I’ll have to make a point to pick up that deluxe edition for her final output. *(Another perplexing item that comes to mind, is we don’t have a remastered, new edition of Cheap Thrills.)

The same point can be made for films and books about Janis Joplin; it’s merely scatter-shot. I haven’t read Myra Friedman’s book, Buried Alive: The Biography of Janis Joplin (1973), but I hear it’s good, so I’ll have to get it and read it. There are some other titles too I’ll want to take a peek at, but I wonder if they’re all that good?

By way of films, Janis is really the best, but it was done back in the early 1970s; hasn’t anything else come out since then? I mean something substantial such as Marley. I believe I did see the Festival Express tour film once, and that was interesting, but more like just raw footage, drinking whiskey on the train (may need to see it again); ’twas the blemished bad side of Janis’ tumultuous career.

I believe what I’m getting at, is that Janice’s life and musical legacy hasn’t yet been institutionalized, such as say, The Beatles, Elvis, The Rolling Stones, or Jimi Hendrix’s have. Yea, that’s what I’m saying! If I can throw in my own two cents, I’d have to say, she literally imported aspects of Texas culture and reinvented California with Texas’ influences. The Beautiful People phenomenon was practically invented by Janis as a reaction against what had happened to her in her hometown of Port Arthur.

Her rebelliousness and urgency of soul-felt blues (from a woman’s point of view), and personal pain persuasively transformed all of the youth across our troubled nation (remember, this was the Summer of 1967)!

Janis changed our society in a very short period of time, and that’s why she is still wildly and blindly worshipped today by millions, and especially by us Texans. She’s our hero who went out to California and told ’em how it is and how it will be, as far as art and blues go. Is she a saint that we worship, such as Mother Teresa?

Well, practically, yes, but it’s a Subterranean Mother Teresa! Maybe, more like an Egyptian Isis figure or a Cerulean Cybele of some sort. I mean, Janis is more Dionysian than Apollonian. Christian? Maybe, but more likely a woman with an incredible conscience and set of ethics regarding how life should be led. Freedom of spirit is always more important than mirroring society in a robotic fashion! If that’s all you can learn from Janis, then that’s good enough.

I’ll just have to return to some specifics, since the Bigger Picture for Joplin’s legacy is still lacking. I think to say, I hope my words will put a fire underneath the people who are capable of putting some order and shine to her sizable contributions to the art of Pop Music, and even larger issues, such as women’s rights, individuality, freedom of expression, or perhaps it’s real simple, the courage to speak your mind and say I’m not what all of you think I should be, just don’t fit your mold, and won’t do it – rather die (which is what she ultimately ended up doing)!

I’ll give you just a few poetic words on 4 songs from Janis Joplin’s best work, from the Pearl sessions, produced by Paul A. Rothchild, who for some reason, knew exactly how to project her Blues-Rock Soul Singing Style. I’ll suggest it’s her backing band (Full Tilt Boogie Band), who could play those instruments just perfectly, that led to this masterpiece. 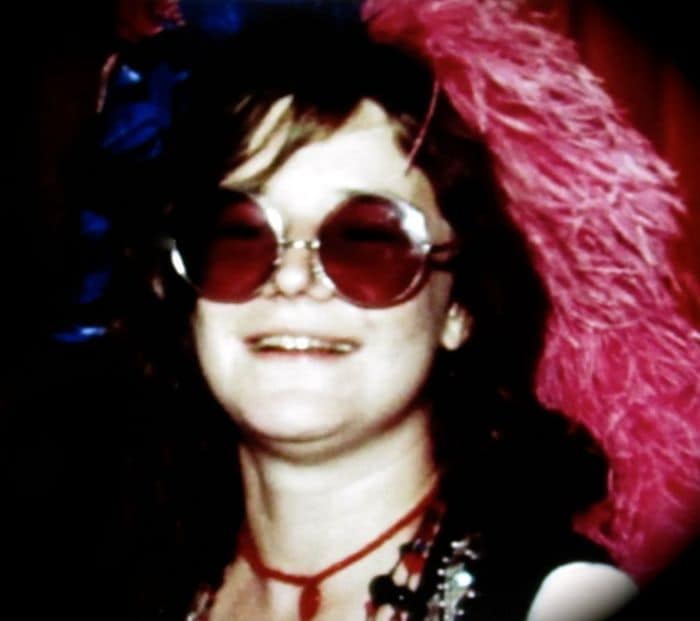 I have to list these guys, since they should get a good deal of the credit for customizing Janis’ sound, in its final incarnation. Richard Bell was on piano, Ken Pearson on organ, John Till on electric guitar, Brad Campbell on bass guitar, and Clark Pierson on drums. One preserved Dick Cavett Show has the band working with Janis, which gives you a pretty good idea just how great these guys (and girl) were together!

Alright, so Cry Baby will pull you apart; like Humpty Dumpy you’ll break into a million pieces as Janis climbs inside your guts and mesmerizes you with pain and hurt and blues and raspy pleas of aspiration of perspiration, and the guitar climbs up your tingling spine, then the organ takes you to the Waters of the Lord and Purity, upright twinkles up and down; your baptized and ready for the gutter, or wherever JJ would go after a spirited performance, after chewing on the side of a studio microphone.

Half Moon is a splasher/funk excursion, the guitar springs out and breaks into the B section, then a lead break, giving it lots of variety, then back into verse two with JJ pushing out words from the inner sanctum of her tearing, hurtful heart. High piano riffs dance about your mind, the final four bars of the verse.

Opening hook perfect for what Janis does with the Rock/Blues Experiment she created (all on her lonesome). You’ll have to climb inside the track to see what I mean! Feel like I’ve just discovered Trust Me; simply an R & B miracle! The organ part is what makes it for me. Bobby Womack custom wrote it for JJ; absolute R & B perfection.

Get It While You Can got a lot of airplay back in the day, as I remember from my youth. But listen to it on some better equipment, where you can hear the stereo separation; clearly defined electric organ, acoustic twinkling keys, thumping bass, piercing, soulful lead guitar, immaculate vocals (no one will ever touch JJ’s vocal delivery), makes for a consummate expression from her crumbling (yet salvageable) catalog.

Janis deserves more Tender Loving Care, as she fades into the obscurity of a Spirit Gallery, known as The Rock of Ages! This is a plea of urgency to begin the process of archaeological (a musicological specification) preservation, conceived with JJ’s predestined place in history in mind. Her memory must never fade away, she’s that important (to Texas and to California)!

*Photos are mine, shot from the 1973 documentary, Janis.

Here’s an interesting archive. John Burks original Rolling Stone review (November 1, 1969) of I Got Dem Ol’ Kozmic Blues Again Mama! Boy did he get it right, one blooper of a record, yet still an interesting artifact!