A zany Night Of The Living Dead road movie zom-edy featuring unusually high speed undead that would tend to give the best odds to survival of the thinnest, Zombieland is likewise reborn as a horror concept, as it retools the genre with attitude that is both freaky and devilishly cool. Ruben Fleischer’s doomsday dork survivalist tongue-in-cheek thriller keeps hyperactive tabs on its assortment of flaky human nomads in flight, as the countdown to the end of days of America plays out while body count leftovers proliferate.

Jesse Eisenberg is Columbus, the reluctant young zombie assassin with a master plan and how-to survival manual on creative ways to avoid becoming zombie dinner, that he generously shares with the audience via cracks in the movie’s fourth wall. And it’s a presumably smart guy strategy for making up with brains what he seriously lacks in brawn. Which is no easy task, considering that long before the mad cow disease hysteria preceding this current ‘mad person epidemic,’ Columbus trembled at the mere thought of being left alone in a room with babies or clowns. Not to worry, Columbus is soon joined on his long distance trek back home to Ohio, where else, by Tallahassee (Woody Harrelson). The gun toting rural lunatic is more into torturing and overkilling in no particular order the famished zombie folk, while in pursuit of his own unwholesome craving, Twinkies. 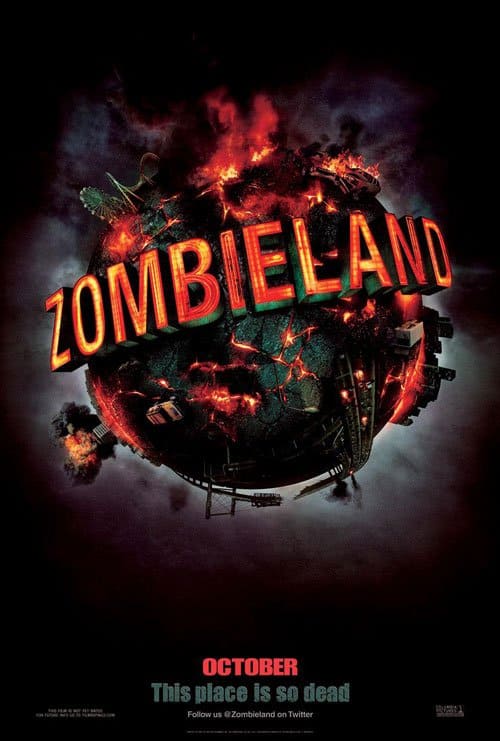 But Zombieland isn’t just about danger, death and digestion. Along the way to what seems like basically nowhere, the mismatched duo meet up with two conniving kid carjackers Wichita (Emma Stone) and Little Rock (Abigail Breslin) caught grazing for snack food in a supermarket, while at least a few characters get the brainy idea of trying to pass for zombies, for their own far too weird respective reasons.

While blood splattered body parts are certainly in raw overabundance on this movie’s menu, the carnage is inevitably upstaged by sheer ballsy wit that’s got a bite of its own, and in serious competition with the gore that’s usually too inventive to be just plain grossout. And by the time the hallucinatory when not hunger-prone escapade ends in a ridiculous amusement park showdown as it indeed should, there’s plenty more to this anti-cannibalistic cross-counry quest than frantic humans in search of a utopic zombie-free zone.