The raging red state/blue state town hall meeting battles over issues like health care and taxes may have spilled over into the multiplexes as well, if recent film fare is any indication. Winding down in 2009 on movie screens around the country was the cowboy country satire, Did You Hear About The Morgans?, and turning up barely past the New Years Eve 2010 confetti cleanup, is the bible belt baiting talkaholic teen comedy, Youth In Revolt.

Based on the C.D. Payne 1993 bestseller Youth In Revolt: The Journals Of Nick Twisp and directed by Miguel Arteta (Chuck & Buck, Star Maps), the daringly offbeat chucklefest finds Michael Cera (Juno, Superbad) in dual identity crisis perpetual mope mode about his loathed last name Twisp, along with his inability to score dates. But oh, Nick’s gift for goofy gab. In other words, he’s kind of a guy Juno, with that telltale flair for nutty but eloquent outcast monologue-ing.

Nick has also long been harboring a bruised adolescent psyche with auto-erotic tendencies, linked to fears about dying a virgin. Even worse, he’s surrounded by no less than two sets of divorced, sexually active party animal parents that make is miserable state of celibacy even more intolerable. And while Mom (Jean Smart) confides in her role-reversal parenting son that she’s stuck with a paunchy pathological liar younger boy toy trucker beau because she’s 48 years old with stretch marks, the relatively wiser and more mature Nick suggests that she’s selling herself short. In effect, by not waiting for a possible stretch mark fetishist who could materialize just around the corner, who knows. 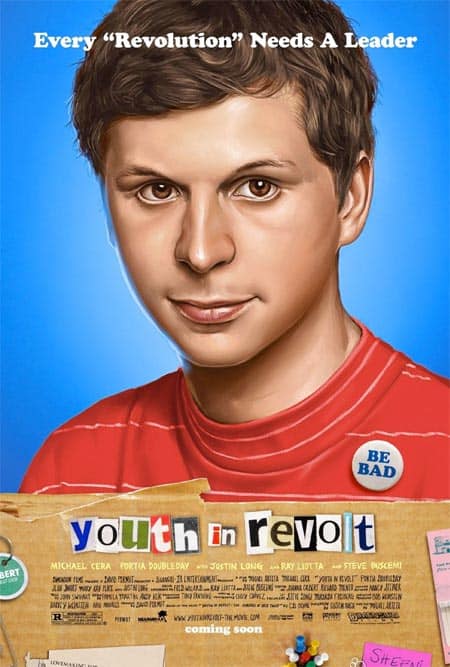 As Youth In Revolt proceeds in increasingly daffy directions, Nick nearly gets lucky while condemned to summer vacation with his grouchy dad (Steve Buscemi), hooking up with conniving cutie Sheeni (Portia Doubleday). That is, when she’s not sentenced to trailer park duplex house arrest by her fanatically evangelical parents (M. Emmet Walsh, Mary Kay Place), dampening any desires on the part of either Nick or Sheeni’s real boyfriend menacingly lurking about.

In any case, Youth In Revolt, though threatening at times to descend into terminal silliness, elevates that notorious dumb and dumber genre known as teen comedy, into fresh and verbally tangy territory. Enough so, to easily earn the movie informal bragging rights as Juno II.