Is Yes Man a riot and does Jim Carrey get to live up to his own reputation in this mind control motormouth outing? The answer is yes, and no. Finding himself at the crossroads of something or other, and this time around not just as a character but an older funny man deep into midlife crisis territory with pressing identity reinvention issues, Carrey makes a less than winning bid to pull off sweet, sexy, serious and outrageous all at the same time.

Banking on that multiple personality makeover here as sourpuss contrarian LA loan officer Carl, Carrey takes the advice of a nutty pal to attend a self-help Yes convention presided over by a grouchy guru (Terence Stamp), to turn his life around and think positively. The problem is that he then swings in the opposite direction and becomes incapable of ever saying no, and in serious situations that require just backing off for his own good.

In between battling his own assorted daffy demons, Carl encounters and falls in love with Allison (Zooey Deschanel), a ditzy outdoor health trainer. And she’s such a turn-on for the lonely loon, that his addiction to surfing the Net for babes at PersianWifeFinder.com, pretty much wanes. 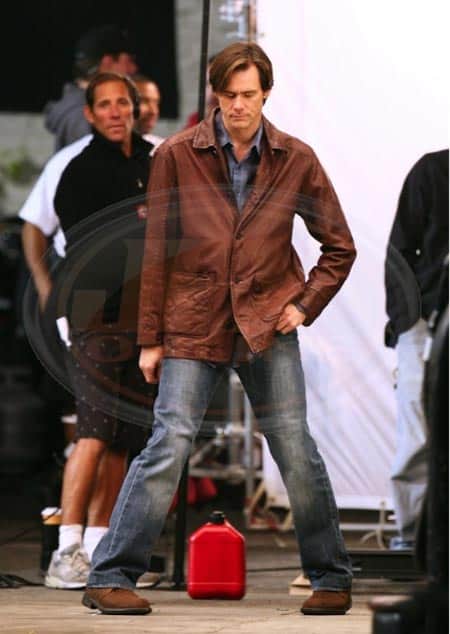 Directed by Peyton Reed (The Break-Up) and adapted by Nicholas Stoller (Fun with Dick and Jane) from the Danny Wallace’s memoir probing a similar dilemma, Yes Man, like its ambivalent protagonist, never quite settles down into a narrative comfort zone. And, with those zany Carrey moments just too few and far between.

At the same time, there are a few just not funny episodes. Including an annoying suicidal ledge jumper who’s coaxed into rethinking his life and death priorities, by joining Carl in a duet with sidewalk gawkers as backup singers. And then there’s the usual grotesque older woman sex maniac (Fionnula Flanagan) who’s always the butt of chuckling scorn in these sorts of comedies. So how come nearly the same age difference between Carrey and Flanagan also exists between Carrey and that goofy big bangs brunette Deschanel off screen, but when it’s an older guy rather than a woman, it’s all about romance and not ridicule.

In summing up Yes Man, on the negative side, Zooey doesn’t have much to do except the laugh track thing to Carrey’s antics. And on a positive note, Carrey gets to make out with three women and also moon the audience on a motorcycle, if that’s your thing.