When terrible tragedy strikes the most impoverished and vulnerable around, the media cameras are certain to show up quickly to sensationalize and exploit their suffering. But nearly as indifferent as the receding natural disaster that leaves its quite forgotten victims stunned and stranded in its wake, the press departs with hardly a second thought for the traumatized and their fractured lives left behind.

This grim and far less financially rewarding task is often left to filmmakers who care enough. And Aditya Assarat’s Wonderful Town makes just such an attempt as it dramatically spotlights Thailand’s tragic aftermath following the 2004 tsunami disaster, though within the inherent limitations of his perhaps far too reticent feature film debut. 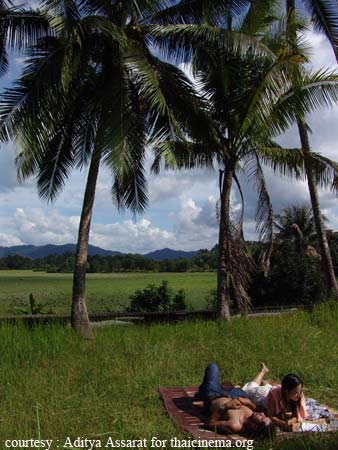 Ton (Supphasit Kansen) is a young itinerant architect who arrives from Bangkok in the destroyed coastal town of Takua Pa to participate in a luxury hotel rebuilding project on the coast. He checks in at a dingy hotel where the shy and lovely Na (Anchalee Saisoontorn) toils as a chambermaid. Ton is instantly smitten with this naive country girl and is soon pressuring her into an affair, though he has no serious intentions of taking the relationship further. Eventually the locals, in particular the aimless rough youth of the town, turn against the stranger. Though Ton barely acknowledges the feelings of anyone around him, so caught up is this self-involved man in his own thwarted life dreams. Perhaps he represents for them an uncaring nation centered in a thriving metropolis like Bangkok, that has abandoned the rural poor in their hour of need.

The shots throughout the ironically titled Wonderful Town of the terrible ruins encircling these damaged lives, is poetically haunting in its stirring minimalism. But the narrative that runs as a delicate thread intertwined with these bruising images, doesn’t quite measure up comparatively in lyrical or dramatic intensity.