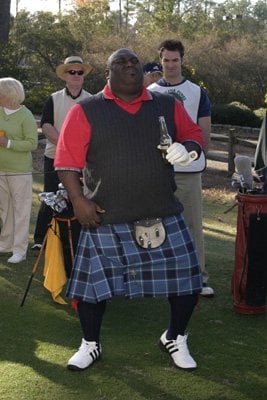 In Caddyshack (1980), arguably Rodney Dangerfield’s finest hour on film, the late comic stole the show as a nouveau riche tycoon who outraged the old-moneyed members of the exclusive country club he was thinking of buying. The running joke in that fish-out-of-water classic revolved around his bull-in-a-china closet boorish behavior and bad taste as he offended relatively-uptight members of polite society.

Who’s Your Caddy resurrects the same premise, but basically in blackface, relying on the racist notion that you can take a brother out of the ghetto but you can’t take the ghetto out of the brother. The picture stars gangsta’ rapper Big Boi (aka Antwon Andre Patton) in the Rodney role, only typecast as C-Note, a mythical hip-hop icon from Atlanta who’s “getting his pimp thing together.”

Having made a mint in the music biz, he now has the cash to hang with the upper-class. At the point of departure, we find Mr. Note trying to integrate an all-white golf and polo gentleman’s club in South Carolina. Of course, this doesn’t sit well with the board’s president, Richard Cummings (Jeffrey Jones), since he’s recently rejected the applications of not only Reverend Al Sharpton and Rosie O’Donnell, but even former President Clinton. 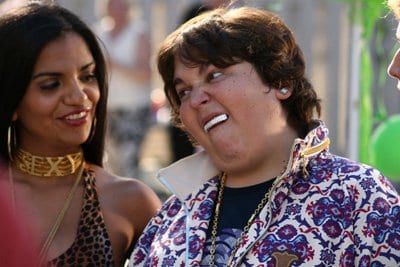 Then there’s Dreadlocks (Finesse Mitchell), a wasted stoner who just wants to get high, and expects everybody else to join in. So, he’s not above spiking the brownies at a party or feeding weed to a horse in the paddock. Rounding out the crew is token-white Kidd Clean (Chase Tatum), the only hanger-on who doesn’t dress or behave like a clown. The beefy bodyguard’s real job seems to be to laugh at the antics of all the blacks, especially his boss, who prances around preening in a throwback golf outfit, complete with knickers, saddle shoes, argyle socks and a garish, test-pattern blouse, all topped off by a tam o’shanter.

The plot thickens when C-Note, with help of that flamboyantly-effeminate, white character (Todd Sherry) cast in virtually every African-American comedy, purchases a piece of real estate with an interest in the country club and starts shooting his next music video on the 17th hole. Offended by the presence of the scantily-clad “video skanks,” Cummings hires Shannon Williams (Tamala Jones), a Harvard-trained attorney, to “wine and dine” the interloper to buy back the property for $3 million.

But rather than being swayed by “Abercrombie and Bitch,” C sees through the ruse and opts for a date with a stripper, “getting off the pole in 15 minutes.” Upping the ante, Cummings next hires a dwarf assassin (Tony Cox) to make him an offer he can’t refuse.

Who’s Your Caddy is a relentlessly-crass enterprise that never makes any sense, unless thought of as an ongoing attempt to portray black folks in the worst possible light. Scriptwriter/director Don Michael Paul must shoulder the bulk of the blame for this disgraceful debut release of Our Stories Films, a black-owned studio started by former BET Chairman Bob Johnson. 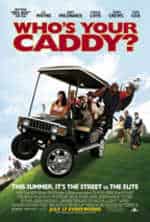 In fact, Johnson, who makes a cameo in the picture as himself, is just about the only African-American allowed to maintain a modicum of dignity in this overindulgence in insulting stereotypes. From the demeaning dialogue sprinkled with the N-word, the S-word and the P-word, to yet another black man romping around in a skirt, to a black female proudly referring to herself as a “queen b*tch,” to the celebration of drug abuse, indiscriminate sex and conspicuous consumption, one can only cringe when wondering what quality of fare might be next on Our Stories’ agenda, given that this one was proudly promoted as a wholesome family film.

The most degrading, minstrel coon show since Soul Plane!