While movie audiences may relish looking forward to what’s up on the screen, far fewer are likely to care about how it got there. But like the internal perpetual crap shoot and big bucks blown on questionable movie fare, director Barry Levinson is willing to take his chances on backroom and behind the scenes generally pathological reality show drama known as Hollywood, with What Just Happened?

This fact-based insider satire adapted from screenwriter Art Linson’s tell-all book, finds frantic high stakes producer Ben (Robert De Niro) dashing all around town brokering shaky deals, when not settling old scores and sorting out several different sets of kids from his collection of failed marriages, to drive them all to school. And in a business where producers are dubbed ‘the mayonnaise in a bad sandwich,’ Ben is also currently doing damage control on his latest violent action thriller, Fiercely (starring Sean Penn as Sean Penn), where a test screening audience has just submitted a disgusted thumbs down. This, after the finale where a dog gets his brains blown out, in the midst of an otherwise ironically well received gangland murder spree. 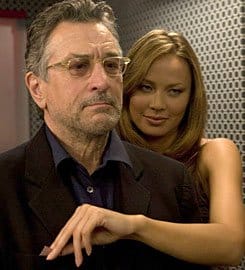 When ballsy femme studio honcho Lou (Catherine Keener) orders Ben to loose the canine carnage footage on the cutting room floor or else have the picture dropped out of the Cannes lineup, he schemes to do otherwise. There are also various comical dangling narrative threads that make bids for audience attention amid Ben’s ongoing woes, including Bruce Willis who shows up fat for a movie rehearsal and refuses to shave his overgrown beard for the role, and a suicidal agent’s funeral to attend, where Ben does surveillance on the crowd to keep tabs on who showed up to steal the dead guy’s clients.

And for a bit of downtime drama of his own, the nervous wreck producer has been pestering one unimpressed ex-wife Kelly (Robin Wright Penn) to reconcile. Though when he finds a mystery male sock under her bed, Ben conspires to play the pissed off prince to whatever conniving same-sock-size Cinderella colleague may have been sleeping with Kelly on the sly.

With John Turturro and Stanley Tucci rounding out the energetic conspiratorial ensemble of ‘thieves and pimps running free’ all over Hollywood, What Just Happened? has its own peculiar charm. But one that tends to wear thin, as unlikeable characters multiply in all sorts of caustic and unredeeming ways.