In 2006, Norman Solomon published an incendiary best-seller which indicted the Military-Industrial Complex for its employment of perception management techniques to manipulate the public into reflexively supporting the seemingly neverending series of American conflicts from Korea thru Vietnam and clear up to the current occupation of Iraq. Solomon’s thesis was that in each case the Department of Defense simultaneously mounted a massive propaganda campaign in order to manufacture consent for another war of aggression.

Narrated by Sean Penn, Solomon’s thought-provoking book has now been adapted to the screen as an equally-unsettling expose’ entitled War Made Easy. Meticulously-researched, the documentary effectively illustrates an assortment of parallels between the rationales offered for the U.S. interventions in Southeast Asia in the Sixties and the Middle East in the wake of 9/11.

But most chilling are the film’s reams of recent file footage showing how virtually all of the mass media eagerly beat the war drums on behalf of the Bush Administration in anticipation of the invasion of Iraq. For instance, there’s a scene featuring ABC’s Ted Koppel embedded with coalition troops somewhere in the desert where he muses, “I’ve been thinking of something appropriate to say,” and pauses momentarily before exhorting the soldiers’ bloodlust with, “Wreak havoc and unleash the dogs of war!” 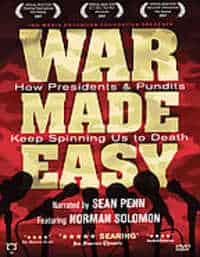 By contrast, Phil Donahue, whose talk show was canceled due to his questioning America’s motives at the time, was like a lone voice in the wilderness on the network TV airwaves. Meanwhile the rest of his colleagues can be seen here simply parroting patriotic claptrap claiming that the impending bombing of Baghdad was honorable because it was all in the name of such abstract notions as “freedom” and “democracy.”

Killing for peace cleverly compared to fornicating for virginity.