One thing about getting together with Jim Carrey for an interview, there’s never a dull moment. But the whole experience can feel more than a bit like you’re his personal shrink, rather than a reporter. Getting surprisingly metaphysical about the universe today between his all-natural punchlines, Carrey weighed in, literally, on what it’s like to play an elephant in Dr. Seuss’ Horton Hears A Who!, how being an odd kid growing up perfected his talent for funny, and Armageddon in his pants right now, don’t ask.

Did you do any research to play an elephant in this movie? 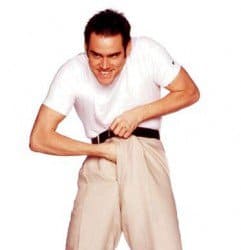 JIM CARREY: I thought of peanuts on my breath. And I thought I wanted to be the type of an elephant that didn’t realize he was enormous and bulky. He was light as a feather! Maybe it”s an inferiority complex, I don’t know.

How amazing was it to do Horton Hears A Who! with Steve Carell?

Okay…Most people think that Dr. Seuss’ stories can be understood by humans of any age. What do you think?

JC: Wow…I think, as far as kids go, the thing that attracts them to this is not the deeper concepts involved. It’s really just the fact that Seuss’ creativity was so incredible. He was such an original. 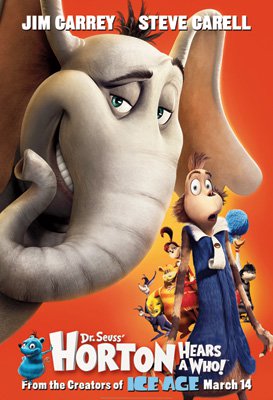 In my own personal experience, I just looked at it. And I’ve always been drawn to things that are different. I felt odd anyway, as a child. So when anything was odd I went, ‘oh, those are my people!’ I dig those people. So there is something very original about that whole thing. And that’s what draws kids.

As a kid, what was so odd about you?

And I just immediately kind of wanted to be that. So I locked

myself in my room. When all the other kids were outside playing, I was devising ways to make myself appear to be different somehow.

I see…What was it like being sorta just a disembodied voice for this movie?

JC: I love being handled by nerds! Like just to spew something out, and have somebody put wings on it, it’s fantastic. And a wonderful thing.

How come you’ve hesitated to do animation?

JC: What they do is, they come to your house and they say, ‘this is going to be the simplest process in the world.’ They lie to you! Yes, completely lie to you. Anybody who they are doing that to in the future ,might want to take note!

Tell me was there a time in your life where you actually felt like a speck?

JC: I know I’m a speck, absolutely. That’s honestly how I feel. I”m an interesting speck. How can you look at the sky at night and not feel like you are a speck somewhere?

You know, we could swing that arm, hit it against a tree, and we’re gone. It’s Armageddon in my pants right now. I swear to God, it’s Armageddon!

Horton Hears A Who! is also about people having mottoes to live their lives by. So what’s your motto?

JC: Always turn your wheel in the direction of a skid. Oh, and brush your dentist twice a day, and visit your toothbrush twice a year.

Do you fear dentists?

JC: No, no, not at all, I enjoy the dentist. I enjoy trying to communicate with half-a-dozen instruments in my mouth. They always want to talk to you. And they stick all those things in there and go, so, how is the family?’

How did you feel about the Writers Guild strike?

JC: I hope that the writers get the respect that they deserve. The writers are the backbone of the business. They deserve a piece of the action, and they deserve good things.

What are you going to do if SAG (Screen Actors Guild) decides to go on strike?

JC: I’ll be sitting on my duff if that happens. If we go on strike, I will be with it.

Did you have a chance to talk to the widow of the real Dr. Seuss, Audrey Geisel?

JC: Every once in a while I say, hi.’ I was honored that when they brought it to her, because the first thing out of her mouth, she said, ‘can you get Jim Carrey?’

So I feel really honored that she wants me to be a part of a legacy.

Now what about that comic icon legacy of your own. Don’t be shy!

JC: It’s hard to have a perspective on it from inside myself. I just feel like I could be working at a factory again in a month, loading trucks where I started out. Even today, I think to myself, ‘oh, it’s a press day kind of thing,’ and I have to go to that place.

So, I’m going to try to enjoy every person in front of me, in that moment, and to live that way.’ That’s what I do. I don”t really think about iconic anything.