With all the tired movie genres out there these days, why not invent a freaky hybrid. Soviet-born carnage connoisseur Timur Bekmambetov (Day Watch, Night Watch and every imaginable menu of homicidal implementation in between) does just that, as he goes way into overkill with an action noir comix-based concoction plus a side order of S&M gore, in Wanted.

Somewhere in the exceedingly messy future, rival assassin cults descended from The Fraternity, a 1000 year old cutthroat cabal of medieval weavers sworn to maintain order on the planet, butt heads with opposing plans to seemingly wrong all rights in the world their way. Or was it the other way around. At the same time, worry wort bottom feeder accountant Wesley (James McAvoy), a Chicago cubicle drudge loser, frets over his girlfriend’s affair with his best friend, an obese, nagging dragon lady supervisor, and recurrent high anxiety panic attacks barely controlled by frequently downed prescription pills. 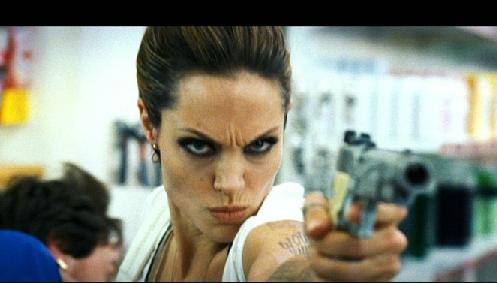 When Wesley stops by the drugstore for one of his frequent refills, he’s kidnapped by smirking, lavishly tattooed Fraternity lady assassin Fox (Angelina Jolie) who takes him for quite a ride, dodging midtown traffic and high speed enemy bullets alike. Back at the textile factory secret headquarters of designer suited head honcho thug Sloan (Morgan Freeman), Wesley is informed that the legendary super-assassin rubbed out by the opposition just yesterday, was the father he never knew. And that his own dormant, suppressed DNA incidentally responsible for his panic attacks, necessitates that he go gunning for his dad’s killer. That is, just as soon as he hones his instinctual knack for shooting the wings off a garbage can full of flies.

Since this unorthodox proposal is basically an offer he can’t refuse, the reluctant rookie hitman proceeds to be literally whipped into shape by gleeful butt kicker, man-slugging Fox. This bloody underground boot camp for perfecting mob mentality skills, also includes instructions in stabbing and getting stabbed back, curve-ball designer bullet sniper attacks while rail surfing on the Chicago El, pummeling refrigerated pigs, equipping rodents with suicide belts, investigating the roid rage potentials of peanut butter, and cornering dad’s assassin while hanging out of a derailed train dangling over a river in Europe.

Adapted by Bekmambetov from the Mark Miller and J.G. Jones’s comix, Wanted may have a great deal to do with the director coming to terms with his own feelings of male powerlessness. Honored as an apprentice filmmaker in the former Soviet Union and serving in the Red Army, Bekmambetov came of age during the bloody CIA orchestrated Soviet defeat in Afghanistan (to which he subsequently paid tribute in his film about the Soviet prisoner of war uprising against the Afghan Mujahideen, Peshavar Waltz). Bekmambetov then later experienced the trauma of the Soviet Union’s downfall from world superpower, descending into the violence and chaos of Russian mob anarchy, a socially and mentally driven breakdown which similarly figured in David Cronenberg’s Eastern Promises last year.