An Israeli anti-war feature that is as gravely concerned with the way battle is experienced in the head, as via guns and carnage, Waltz With Bashir simultaneously blasts its way into theaters and through the minds of audiences – in animation. An Israeli Apocalpyse Now, Waltz With Bashir is, much like Oliver Stone’s Platoon, a profoundly subjective and visceral account of war trauma, similarly through the eyes and damaged psyche of another combat vet turned filmmaker, Ari Folman.

The Israeli director is less focused on introducing his story, than unleashing it, intent on thrusting that war experience on viewers just as he encountered it as a teen soldier inducted into the 1982 Lebanon invasion, who had barely begun to shave. And more in the tradition of horror than docudrama, the film opens with a pack of wild snarling attack dogs tearing through the city streets, hungry for human flesh. We learn that these terrifying images are the first of a series of post-traumatic anguished nightmares experienced by Ari’s mentally damaged comrade vets.

Playing his both younger and present self in animation, Ari struggles with a very different kind of psychological war wound – a complete failure of memory. Yet Ari knows that he was present during the horrific mass slaughter of Palestinian civilians at the Sabra and Shatila refugee camps in Lebanon back then, so who is the memory thief, and why can he not achieve any peace of mind unless he wrestles triumphantly with his war demons. These troubling questions take viewers along on a breathlessly surreal journey through fictionalized recurrent personal nightmares and agonizing flashback collective memory, both real and imagined, that is shared with fellow Israeli vets. Including that Beirut urban warfare waltz, a dance of death with machine gun blazing, of one soldier on the brink of insanity. 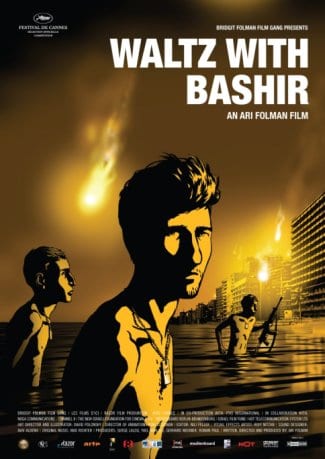 The film does leave unanswered the many questions about the actual complicit role of Israel in the Palestinian civilian massacre by the right wing Lebanese Christian Phalangists after the assassination of their idolized leader Bashir Gemayel (carried out by one of their own). And the uninvestigated suspicions of a related Israeli secret stadium slaughter and mass burial of many of these refugees.

But Folman, a child of Auschwitz Holocaust survivors, doesn’t flinch from the images of the young detained men with crucifixes carved into their chests by the Phalangists, or the terrified children, women and elderly remaining survivors with their hands in the air. And the gnawing self-accusation – am I now the Nazi? An unspeakable genocide of his own generation put into further deplorable perspective, as then Israeli leader Ariel Sharon receives an emergency telephone call to halt the carnage and simply replies before going back to sleep, ‘Thank you, and Happy New Year.’

Waltz With Bashir is that rare feature that is equally the best film of the year, and the most important. Folman’s intent here is clearly to open up a second front, so to speak, spotlighting that other victim of war – the youth sent off to die in combat or left permanently scarred, and barely comprehending the bloody mission thrust upon them. And Folman asks for neither sadness nor pity, but rather the audience’s ignited rage, as helplessly complicit as he has been, in the pain and horror perpetrated and endured.