Alone with Her: Movie Review 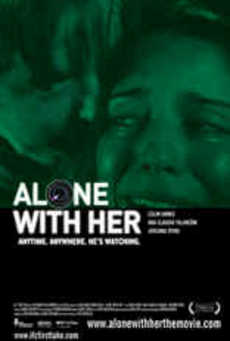 In this Electronic Age when advances in technology allow for any amateur sleuth to purchase surveillance equipment such as a microscopic video camera, what’s to prevent someone with evil intentions from also availing himself of sophisticated, state-of-the-art gadgetry? This is just the premise presented in Alone with Her, where we meet a demented loner named Doug (Colin Hanks), who devotes his days to videotaping unsuspecting women, whether down their bikini cleavage as they tan on the beach, or up their skirts as they perambulate down the street.

The plot thickens as soon as the obsessive-compulsive pervert fixates on Amy Ruis (Ana Claudia Talancon’), an attractive Latina he follows home from walking her dog. Then, while she’s busy at work, he picks the lock on her apartment door and secretly installs hidden cameras around the place, in her bathroom and bedroom, so that he can observe her at intimate moments in a state of undress.

Besides getting off on watching her disrobe, he eavesdrops to learn her taste in music and movies. This info he puts to use when he strikes up a conversation during a “chance encounter” at the coffee shop she frequents regularly. Believing that she has a lot in common with the charming, ingratiating stranger, she unwittingly befriends him, especially since her relationship with Matt (Jonathon Trent) doesn’t seem to be panning out. Unfortunately, after Amy agrees to date Doug, he gets virtually unlimited access to her life, and she becomes even more of an object of fascination for the kinky sicko. What she doesn’t understand is that he is more a voyeur who would rather spy on her than behave like a boyfriend who enjoys spending time with her in person.

Thus, this invasion of privacy scenario is the frightening picture presented by Alone with Her, written and directed by Eric Nicholas. Shot from the scary perspective of the master manipulator as capably played by Tom Hanks’ son, Colin, it’s a terminally-claustrophic, psychological thriller which remains riveting from start to finish. More notably, the film marks the English-speaking debut of Mexican movie star Ana Claudia Talancon’ who delivers a praiseworthy performance, given that as Amy she was asked to carry so many scenes alone.

A plausible, if relentlessly-disturbing, cautionary tale about how easy it might be for a deranged maniac to worm his way into your good graces.