Originally titled What’s Wrong With Virginia but likely revised to cut down on all sorts of puns about what is wrong with this movie, the newly minted Mormon melodrama Virginia has now been intimated to allude to what may be wrong with Mitt Romney. Though not quite sure how Ed Harris as a sheriff turned aspiring Mormon politician in the movie – who prefers to wear his own handcuffs shackled to the bedpost for a little undercover sexual gratification – has much if anything to do with the upcoming US presidential election.

The Virginia of the title refers both to the name of the seriously schizophrenic protagonist Jennifer Connelly plays, and the seedy Virginia Beach locale harboring a host of sinister secrets. As for Virginia, she’s a split personality single mom in a long term affair with the very married Sheriff Tipton (Ed Harris). 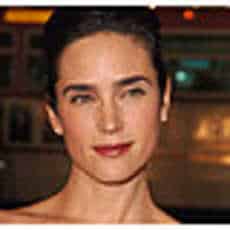 Apparently bored with his marriage to devout, dutiful Mormon wife Roseanna (Harris’ real life spouse Amy Madigan) but satisfied enough with his home life and staying put, the sheriff has been making regular house calls to Virginia on the sly and financially supporting her and her teenage son Emmett (Harrison Gilbertson). Though nevertheless eager to encourage the more than willing Virginia to perform assorted kinky acts in bed, on occasion involving whips, leather and bondage. But not before routinely blessing their trysts with bizarre bedside Mormon prayers.

Eventually lots of weird happenings in town run interference on this centerpiece pathological liaison oddly linking religion and sex. Including Emmett’s courtship of the sheriff’s tempting daughter, coed Jessie (Emma Roberts) after deducing in science class that Tipton couldn’t possibly be his dad as well, for lack of matching earlobes; a bizarre bank robbery involving Emmett’s portly hemophiliac babysitter and the town transvestite; chainsmoking Virginia faking a homemade prosthetic pregnancy while into deep denial about possible lung cancer; and Roseanna getting wise to her faithless spouse when a gold plated sex toy arrives in the mail, inciting her to hang his suspect handcuffs from a front lawn tree.

Meanwhile, as Mormons and nonbelievers alike run amok, discussion abounds about post-mortem polygamy and other forms of romance materializing in outer space in the afterlife This, as enough hallucinations posing as plot points kick in to make the audience schizoid too.

And taking credit for all of the above is writer/director Dustin Lance Black, who penned the Oscar winner Milk, and J. Edgar. Black has been intent on dispelling any ensuing confusion by alluding to Virginia as a portrait based on his own dysfunctional mom. Okay, but still not getting it about Mitt Romney.