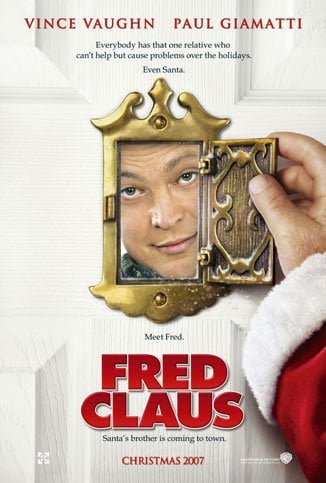 A less naughty than nice but still freaky Christmas comedy about Santa, his eight reindeer, and one black sheep, Fred Claus finds Vince Vaughn’s famously rude Wedding Crasher and by-the-book latest Psycho screen recidivist Norman Bates doing his best here not to get into the holiday season. In other words, it’s kind of all about a rebel with a Claus.

This offbeat revisionist sibling rivalry Santa lore concocts a bad boy bro Fred Claus, whose resentment makes perfect sense in an imperfect world, where Fred gets earmarked as second fiddle from the moment the supersized Santa fetus pops out of Mom’s womb (Kathy Bates) wailing, ‘ho, ho.’ And while Nicholas (Paul Giamatti) grows to manhood favored by seasonal superstardom, Fred resigns himself to a down and out existence as a Chicago Repo-A-Go-Go enforcer for chump change. And, a sometime hustler on the side impersonating Salvation Army sidewalk Santas, in order to fleece gullible pedestrians passing by the donation pail.

When a posse of incensed Santas makes a citizens’ arrest of the unscrupulous Fred, he lands behind bars and dials up Nick to post his bail. Santa reluctantly agrees to help his wayward brother out of a fix, but only on condition that he try out a bit of rehabilitation doing community service up at the North Pole to give a hand filling some tall orders around the planet during the busy holiday season.

But Santa may be in for all sorts of unpleasant surprises, as his new disgruntled employee locks horns with Clyde (Kevin Spacey), the mean-spirited visiting suit on the premises, an efficiency expert and grouchy Scrooge of a man, intent on shutting down Santa’s enterprise and outsourcing the operation to the South Pole. There’s also a faceoff between Fred and Santa’s elves, including creative differences with DJ Donnie (a m-igitalized Ludacris) over the music he’s piping in to the workshop floor, which ends with Fred tossing the little guy into the designated naughty closet. On the other hand, the lanky lout does take time out to perform a good deed for one romantically insecure little Santa’s helper (John Michael Higgins) he bonds with over the pint-sized urinals in the john, by teaching him some dirty dancing, elfish style.

While director David Dobkin (Wedding Crashers) serves up Fred Claus mostly light with sugar, this screen Saint Nicholas is not entirely saintly, at one point mulling running over that bad news brother with his motorized Santa-mobile, when not giving grief to peeved spouse Annette Claus (Miranda Richardson) at home with his eating disorder and ever expanding waistline, acid reflux, sleep apnea and low sex drive, you get the gist. The story does have its heart in the right place, eager to please audiences of all ages by switching it up between shock effective cameo-steeped Brothers Anonymous confessional meetings and Claus family therapy sessions more suited to the adult crowd, with Christmas fantasy interludes bathed in kid euphoria. But a movie just can’t come across the same way as an overstuffed bagful of motley surprises from that something-for-everyone jolly old guy in the red suit.