Recording devices are starting to become as prevalent in movies lately as incendiary devices, along with more conventional deadly weapons, and sharing nearly as much screen time. Vantage Point, while flashier, pricier and more hi-tech in concept and dramatic execution than, say, Cloverfield or Diary Of The Dead, similarly follows that new trend of cameras and cyberspace gadgets elbowing their way into an apocalyptic narrative.

What that may all mean is anybody’s guess. But three movies in nearly as many weeks that position switched-on camcorders and palm pilots front and center to stories in which protagonists never let them go, even in the face of imminent death, may be telling commentary, however subconscious, about humanity today as helplessly passive-consumer, civilian/spectators clinging as to a life raft, to whatever implement affords a psychological sense of control over destiny in an increasingly uncertain world. 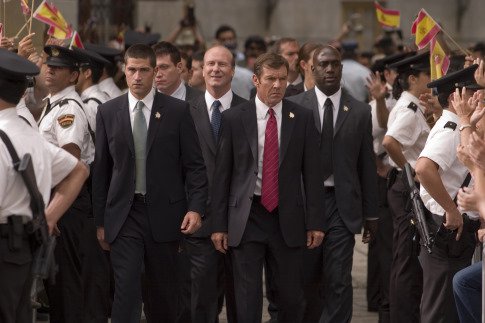 In Vantage Point, Irish director Pete Travis (Omagh) drops the viewer right into the tense tempest of an international anti-terror summit taking place some time in the future, in Spain. The global situation has apparently grown far worse, with assassination attempts and bombings as regular occurrences worldwide. Leaders antagonistic to one another from Western and Muslim nations, have agreed to meet and negotiate at this historic meeting.

Security is swarming the square around where the summit will take place, along with reporters, hordes of anti-US protesters, and apparently a number of terrorists planning an attack. Meanwhile, Rex (Sigourney Weaver), a harsh bulldog of a TV producer, is barking orders along with insults from her media van in the vicinity, to the crew on location. 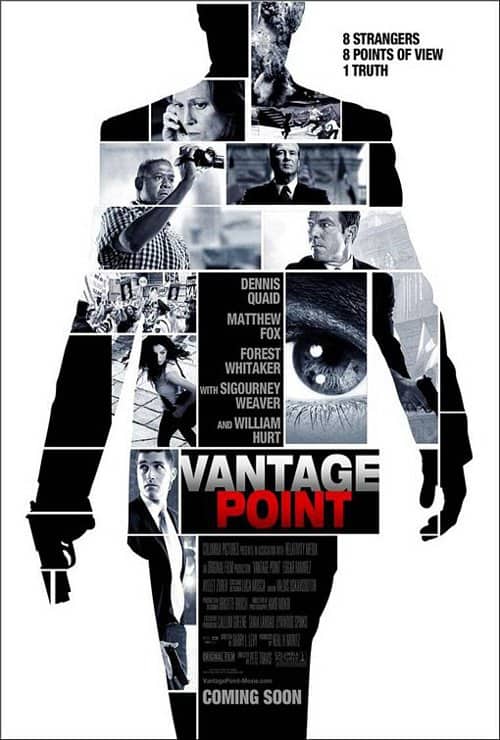 Attention is also focused on Barnes (Dennis Quaid), a Secret Service agent on leave after suffering some sort of post-traumatic stress disorder as a result of failing to impede a few presidential assassination attempts. He’s been called back into duty to guard US President Ashton (William Hurt) who is attending the summit, and is sweating it out in private over having to face this new assignment. Also present in the square is Forest Whitaker’s far too curious American tourist taking it all in with his camcorder, and arousing the nervous attention of possible assassins toying with their palm pilots.

Discarding conventional forms of narrative for one perhaps more aligned to how actual reality tends to play out, Vantage Point masterfully pumps up the panic threshold of events by repeatedly replaying events on fast forward and rewind, from the rotating perspective or vantage point of eight unique protagonists. As each version is fleshed out, the movie in a quite clever and fascinating manner builds additional clues to the mystery at hand, while discarding others that the audience had come to feel secure with, as part of the continually rearranged teaser of a puzzle.

Vantage Point may not quite cover all its bases, in particular when it comes to some character motives taken to extremes and a clear political context for all the ensuing mayhem, including the masses of summit protesters. And there’s also the matter of several characters getting run over more than once and emerging from horrific car wrecks, with hardly a wrinkle in their pants. But there’s enough stylized energy and super-charged momentum to keep audience attention span on high alert, and glued to the screen for the duration.