While Valentine’s Day is allegedly the busiest time of the year for the delivery of mushy messages and corny love trinkets all around town, the same should never be the case in a movie. Hyperactively busy in the extreme while negotiating endless crisscross plot lines between way too cute celeb cameos that include geriatric infidelity and worse, Garry Marshall’s Valentine’s Day is skits-ophrenic moviemaking when less would have indeed been much more.

In other words, where does one begin. It’s Valentine’s Day morning in LA, and shy guy florist deliveryman Reed (Ashton Kutcher) wakes up extra early to propose marriage to ambivalent girlfriend Morley (Jessica Alba), who seems to more attached to her cellphone. Literally. Which means that Reed has to figure out just how to pry her fingers loose from the notoriously addictive gadget, in order to find that spare finger for his engagement ring. 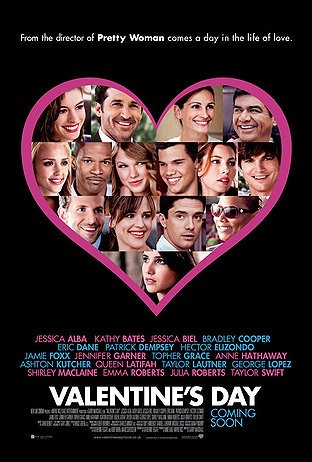 While on another side of town, anxious television news anchor Kelvin (Jamie Foxx) has just been demoted to puff piece patrol to sniff out human interest holiday stories, while the weathergirl taps dances away to stimulate the sagging ratings. And which Kelvin needs to wrap up, before jogging over to a press conference at which a famous athlete will announce he’s gay.

Elsewhere, giddy grade school teacher Julia (Jennifer Garner) who is otherwise fairly luckless in romance, daydreams between classroom lessons about her current surprise requited crush on a possibly too good to be true affectionate physician. This while a more sensible and stern army captain (Julia Roberts) shares a philosophical plane ride with a mysterious stranger. Who will actually get to have the last word eventually in wrapping up this overly crowded scenario, that seems less like a smoothly paced script than a rush hour traffic jam on the LA freeway.

But there’s more. Also getting in on the act for some dubious comic relief, is Jessica Biel as a thoroughly unconvincing sad sack who can’t get a date. As a frantic Anne Hathaway appears to be revisiting her persecuted workplace drudge in The Devil Wears Prada, with Queen Latifah seemingly preempting Meryl Streep this time around, doing The Devil Wears Plus Size Prada.

And while Hathaway moonlights on the sly during work hours as a phone sex operator to make ends meet and pay for her health insurance and outstanding student loan, her dirty talk conversations are so lame PG, that the actual phone sex industry may end up losing business. Though Queen Latifah’s boss from hell secretive impulse to move in and take over Hathaway’s seductive operation with virtual bullwhip in hand, couldn’t be funnier and saves this collaborative mayhem from looming movie overkill.