If there’s a job that can be viewed as even more loathsome than say, IRS investigator or debt collector, it’s George Clooney’s odious occupation in the not exactly uplifting downsizing satire, Up In The Air. As carefree corporate hitman, Clooney is Ryan Bingham, an outsourced specialist in firing workers for big business, so that they don’t have to.

But the self-satisfied and self-possessed workforce mopup maven could care less about the damaged lives he may leave in his wake. For Ryan, it’s all about frequent flier miles in the skies that he counts as home more than any grounded turf, and his lifetime aspiration of racking up the magic number of ten million.

Directed and co-written by Juno big screen mastermind, Jason Reitman and based on the novel by Walter Kirn, the inadvertently prophetic Up In The Air was conceived before the current national economic crisis, but is a more than welcome addition to the typical shallow Hollywood more focused on flatulence jokes and creative killing. With tangy sarcastic dialogue and brilliantly brash attitude that cuts to the core, Up In The Air is both brutally entertaining and profoundly in touch with the everyday reality of audience lives. 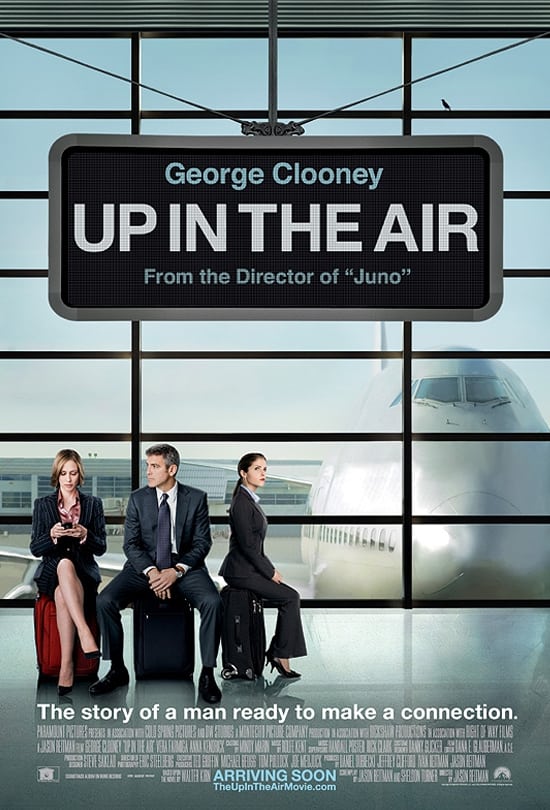 And whether or not such pink slip itinerant suits exist in real life, is beside the point. Ryan couldn’t be more thrilled to be pimped out to companies while specializing in screwing their employees, because he believes he’s dumping those workers with an imagined elegant personal touch, rather than utterly destroying their lives. So when old school Ryan may be about to get a taste of his own medicine and have his wings cut so to speak, by young hi-tech efficiency expert Natalie (Anna Kendrick), midlife crisis doubts suddenly materialize about an existence devoted to determined transience, along with compassion and commitment avoidance at all costs.

It seems that internet specialist Natalie has a cheaper, less emotionally interactive and more swiftly robotic method of dumping workers, via remote video conferencing, and while never having to leave one’s computer terminal for pricey flights around the country. Kind of like executions via lethal injection instead of those messy firing squads. All of which forces Ryan to seriously rethink his priorities on the planet, or rather while circling it. In particular his literally fly by night ongoing erotically charged though elusive affair with enigmatic fellow corporate nomad, Alex ‘think of me as you without a vagina’ Goran (Vera Farmiga).

Reitman’s sharply honed script doesn’t mince words dramatically or politically, as he does double duty as Ryan’s opportunistic boss sticking it to Clooney’s servile henchman. While Reitman’s genius move of hiring real life people out there who’ve actually been fired, exquisitely proves the exception to the rule that you have to be an actor, to both dazzle and devastate audiences in a movie.