A densely erotic, twisted take on teen screen romance, Twilight zones out beneath the crushing weight of underage lust intensified and complicated by the excruciating abstention here of unorthodox vampire appetites. And rebel teen angst maven moviemmaker Catherine Hardwicke (Lords Of Dogtown, Thirteen) weaves yet another credible tale of consuming pubescent passions that has stirred a kind of Beatlemania girl feeding frenzy of its own offscreen, at the mere sight of neo-Brandoesque Robert Pattinson. And while not exactly The Man Who Came For Dinner, Twilight conjures a defiant inter-species dating fantasy that might just as well be termed Close Encounters of the Thirst Kind.

Based on the insanely popular young adult novel by Stephenie Meyer, Twilight plays out conveniently in the fog-shrouded rural woodlands of the rainy state of Washington, where local vampires can apparently roam free at all hours of the day since the punishing sun rarely shines. Bella (Kristen Stewart) is a moody teen loner who relocates from Mom’s home in Arizona to the town of Forks (a particular implement hardly necessary for undead dining), to live with her police officer divorced dad (Billy Burke). 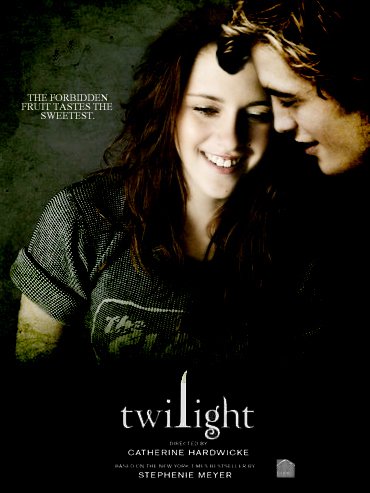 When Bella shows up for her first day at school, she’s instantly and mutually attracted to a strangely handsome boy (Robert Pattinson) in a mad crush at first sight encounter. Edward is part of the peculiar, wild-eyed outcast Cullen clan of matriculated sibling foster kids who occupy a separate nook of the school cafeteria, and seem to be shockingly dating each other. Infatuation soon turns to obsession, and eventually Bella figures out that Edward is a descendant of the undead, something that’s a whole lot faster to deduce these days what with the Internet, when one can simply google a vampire to out him.

There’s a deliriously mystical and forbidden tension – part creeping out and part turn-on for Bella – between these unrequited lovebirds, where sex and death have never been quite so dangerously and libidinously intertwined up on the screen. Tossed in for good measure is a political undercurrent, connecting the local vampires to white metaphorical and otherwise bloodsucker interlopers who did the indigenous Indians dirty centuries ago, and are still conjuring dread in local lore. As such, Edward suffers the subconscious torment of a guilt by association accidental Euro-imperialist, intriguing in the context that vampire legend originated with European peasants to deal with their fear and loathing of the exploiting, overbearing landed gentry.

Cool humor also mingles with the agony and ecstasy of hormonally charged frustrated desires, as a possessive, clairvoyant Edward fumes while reading dirty male minds that are eying Bella, or jokes about immortals having no need to fasten their seat belts, and adheres to a strictly vegetarian ‘special diet’ to get in touch with his long lost inner human. Action sequences are less novel than the emotional journey, though time out for a game of high speed, airborne vampire baseball makes for an incredibly dazzling spectator sport for viewers. In any case, Twilight magnificently redefines both the vampire and teen genres. While one wonders if that inadvertently seductive human snack called Bella teases in more ways than one, with a name likely more than coincidentally, playfully linked to that vampire of vampires, Lugosi.