This isn’t so much a film as a series of vignettes that have been spliced together in a humorless attempt to make a whole. Story strand meanders to story strand, with nothing to break the monotony apart from the bickering of a married couple who have nothing more on their minds than themselves.

Pete (Paul Judd) and Debbie (Leslie Mann) are married and have two daughters, Sadie (Maude Apatow) and Charlotte (Iris Apatow). Pete’s record label is struggling to make money, Debbie’s fashion store is losing thousands, and their daughters are going through the usual growing pains. Pete’s father has remarried and relies on his son for financial support, Debbie’s wealthy father has been absent for most of her life. The couple will be celebrating their fortieth milestone in the same week and a party has been arranged for Pete. 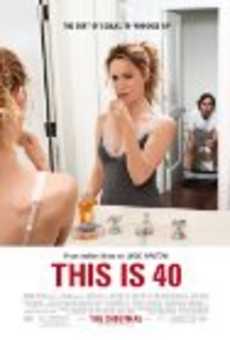 Despite its title, this film fails to deal with the age issue, and instead gives panoramic glimpses of the couple’s ailing businesses; their relationship with their fathers (apparently neither of them has a mother); health checks of their sexual organs; keep-fit experiences; staffing issues; their daughter’s social networking behavior and a bizarre event involving a sketch by John Lennon. To accommodate all this flitting about, Debbie has to skip-hop from a meeting with the accountant (when she discovers Pete has given his father $80,000), to a scene at her daughter’s school, where she bullies one of the students. She eventually confronts Pete about the money, but by this time the tension has dissolved and the story has taken its final step to becoming the slice-of-life melodrama that it always threatened to be.

What this movie lacks in substance, it makes up for in bad language and behavior that is more suited to a frat house than a family home with two little girls. While the ‘f’ word is now used too frequently to be offensive, this is hardly the case when uttered by, or in front of, children. There are a lot of words out there, so why the filmmaker felt it necessary to overuse this particular one is a mystery, as is the entire intention of a story that has no clear goal and no visible finishing line.

There is quite a surprise in the final scene when Debbie announces in painful on-the-nose dialogue that they were all right as they were, and she shouldn’t have tried to change anything. She is actually referring to an unremarkable speech she made about improving the family’s eating habits and being generally more pleasant. At the time, this just seemed like a throw-away scene, but it was in fact the incident on which the entire movie was hung. So taking this declaration into account, the message this film wants to send must be, ‘it’s perfectly all right to lose all your money, as long as you smile a lot, eat junk food and curse out your kids’. If this is 40, I bet you can’t wait to get there.