In director Preston A. Whitmore’s This Christmas, an emotional whirlwind adult family dram-com, everybody has a secret, and we’re not talking those presents under the tree. Combining the holiday spirit with less spiritual tendencies like girl fight sister rivalry, divorce, infidelity and in-the-closet interracial romance, Whitmore conceives of one middle class African American family’s Christmas as a pressure cooker of unresolved resentments and enduring love.

It’s that time of year when the Whitfield adult brood of grownup kids from around the country convenes at their LA childhood home still presided over by Ma Dear (Loretta Devine). While Ma Dear keeps up the sprawling Whitfield home and family dry cleaning business, compliant housewife Lisa (Regina King) is pressured by her conniving, unfaithful entrepreneur husband Malcolm (Laz Alonso) to persuade Ma during the homecoming to sell the business so that he can invest the money in his ambitious enterprises. When professional working sister Kelli (Sharon Leal) arrives, she sets about heaping contempt on Lisa for wasting her life as a virtual domestic servant to a man with domination and betrayal on his mind. 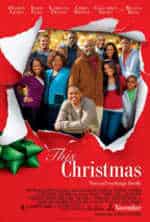 Ma has a few situations of her own too, including her secret live-in deacon boyfriend (Delroy Lindo), her difficulty cutting loose emotionally from a musician husband who abandoned her years ago because he was more in love with his sax, and two sons who hide their own musical ambitions because of mom’s fear that they’ll turn out like their less than devoted father. Meanwhile, Claude (Columbus Short) has gone AWOL from the Marines to make it home for Christmas, but he’s left his white girlfriend stashed away at a hotel in town since he’s too embarrassed to let on to the family that she exists. Oh, and Kelli who ‘d rather spend her time with her work and that vibrator hidden away in the drawer, has caught the eye of a local LA fireman (Mekhi Phifer) who just may get her thinking otherwise.

There’s lots more to these convoluted family machinations, much of it contrived, but the intended audience eavesdropping is rarely dull. The many pleasures of spending time with this variously distressed clan is that there’s no dilemma, however worrisome, that can’t be substantially overcome by the bountiful affection surrounding everyone and drawing them all in. This is a holiday film in the best sense of the word, a bouyant, jazzed up Christmas where for a change human flaws and feelings upstage gadget love.