Where do broken down professional wrestlers go out to pasture, when they’re over the hill and no longer quite ready to rumble and roar? The deli counter at the local supermarket, hawking potato salad and cold cuts? If the magnificently gritty, unflinching The Wrestler has its say on the subject, the answer is maybe, maybe not. And at the same time, just how coldhearted and unforgiving the real world out there can be, even with those obsessively perfected skills honed for their casual amusement by bottom feeder wrestlers.

Darren Aronofsky, that cleancut mastermind with a mysterious dark side who first made waves on screen foraging through the depraved waters of drug addiction with the Hubert Selby Jr. adapted Requiem For A Dream, kind of does masterpiece territory ‘requiem for a heavyweight’ here. And with that temperamental raging bull comeback kid himself, Mickey Rourke as his designated roughneck muse. 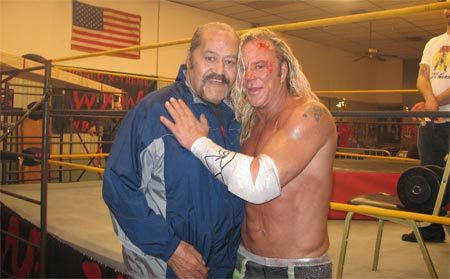 Once reigning 1980s heavy metal era champ Randy ‘The Ram’ Robinson of the Jersey wrestling circuit, this beaten down but unbending strung-out fighter with long stringy, bleached blonde hair, still bulging biceps, and hearing aids for his damaged cauliflower ears, can’t even pay the rent on his dilapidated trailer. Locked out and living in his car, the fiftysomething has-been Randy, who once laid claim to a videogame and action figure in his own image, makes a new bid to regain his reputation and pride in the wrestling ring, despite the ravages of age, a dissipated life and a failing heart.

Aronofsky drags us through the pain, quiet heartbreak and dubious noisy triumphs as Ram steels himself and his buffed but disintegrating body for an ill-advised, delusional return to the wrestling ring. And grueling, gladiatorial rematches that movie audiences will find difficult not to cringe through, but will likely be too captivated by the sheer, if at times pathetic grit and determination of this insistent loser.

Embracing excruciating performance misery and mutilation as a way of life because it’s the sole source of remaining dignity and public admiration for this fiercely dedicated glutton for punishment, Rourke, apparently drawing from his own life as a recognized actor who plunged through the lower depths and is making a bid for a return bout with this role, is nothing less than extraordinary. And by the time he’s taken us through the self-inflicted wringer of ordeals to the flesh involving applied barbed wire, staple guns, ashcan bashing, bug spray and coronaries, we’re pretty much vicariously beat. And, while Rourke’s Ram (or is it Ram’s Rourke, so welded are the two) takes us through the often bizarre wrestling grooming regimen of hair bleaching, armpit shaving, and tanning treatments, along with secret razor slashing in the ring to arouse cheering audiences hungry for gladiatorial blood.

There’s also a tender and sad sidebar as Ram bares his bruised heart for a likewise into denial, aging pole dancer (Marisa Tomei) at a local dive. Is she the longtime girlfriend who has a special thing for Ram that we experience through his eyes. Or just a calculating sex performer, seductively manipulating smitten customers for cash. As Aronofsky keeps us on our toes wondering whether she’s the real deal or stringing the infatuated lonely guy along, we’re just as clueless and needy.

If anything, The Wrestler exposes the troublesome psychological, let alone physical damage of often destructive notions of masculinity and masculine identity in this culture that seep out of all those superhero fantasies crowding the screens. And at the same time adding to that list of survival essentials – food and shelter – the necessity of dignity and self-respect, even at a potentially fatal cost.

To sum up, if Rourke doesn’t grab an Oscar, there is no justice on this planet, simply for crushing the collective audience soul with the often wordless torment of this abrasive but brutally wounded creature. Silence of the Ram, we feel your pain.