With the current vicious and despicable media war on women like Hillary Clinton and Sarah Palin claiming equal rights to positions of power held by men, the arrival of the movie The Women could not have been more timely. Loosely based on the 1939 George Cukor screwball romantic comedy of the same name and adapted from the Clare Boothe Luce play, The Women may be updated by nearly seven decades, but female consciousness has apparently barely budged in the cinematic interim.

Refashioned by Murphy Brown scribe and first time director Diane English to fit the fashion trends if not social temperament of the present time, The Women is once again an entirely male free zone (except for one untainted sample, we’ll get to that later). And where filthy rich socialites lament their personal woes as victims, not so much of men, but workingclass women. 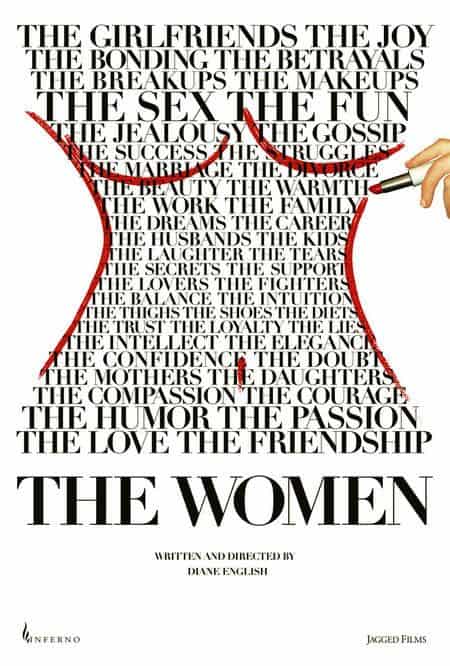 Originally conceived in the midst of the Great Depression as typical escapist fare back then, which giddily embraced the affluent upper classes as temporary quick fix amnesia against mass economic despair, this new and not improved The Women dabbles in an exclusively perky female milieu of smart and sassy, if also frivolously inclined backtalk babes. But for all their surface spunk attitude, the stage has been set from the get-go for the reinforcement of entrenched conventional family values. Including married men as helpless victims of the conniving, trashy and lower class Other Woman, grin and bear it female victims of male infidelity, and what an exceedingly joyful cure the arrival of a male child can be for chronically down-in-the dumps mothers of only female children.

Meg Ryan is Mary, the wife of a Wall Street tycoon who is unaware that her spouse is having an affair with Crystal (Eva Mendes in the Joan Crawford role), the clerk also known as ‘the perfume bitch’ at the Saks pricey toiletries counter, where hubby stopped by to purchase a bottle of the smelly stuff for his wife but got a little too distracted. Among Mary’s circle of gal pals who butt in to defend her with varying degrees of disaster, are neurotic women’s magazine editor Sylvia (Annette Bening), and ballsy lesbian bestseller author Alex (Jada Pinkett Smith). There’s also Mom (newly anti-feminist Murphy Brown’s Candice Bergen), who advises Mary to go the route of secret forgiveness and denial over her husband’s cheating and look the other way, and Bette Midler in a tiny cameo as a pot-smoking, giggly loon who insists that female selfishness is the best revenge.

Dramatic highlights in The Women among this pampered, shopaholic and more often than not whining inner circle of female patricians, include a catfight in corsets that plays out in a Saks fitting room; an upscale fashion show as the road to self-empowerment along with the cure for man trouble blues; and Saks as the ultimate female resuscitating sanctuary that can always be counted on to make life worth living again.

The Women is partially salvaged from being endlessly offensive, as the witty and warm ensemble chemistry of these actresses kicks in. But why are the roles of lesbian outsider and designated home-wrecker villainess relegated to the only women of color in the film? And while there may be no men in this movie – save for that maternal stress-reliever male newborn – the way all the conflicts of these affluent females get resolved through commercially approved lifestyles for women, has the suspicious fingerprints of men all over it.