When Red Stevens (James Garner) passed away, all of his potential heirs were summoned to the billionaire tycoon’s corporate boardroom by Ted Hamilton (Bill Cobbs), his long-time friend and trusted business partner. The reading of the will dashed the hopes of the collection of greedy relatives who arrived with expectations of receiving big inheritances, as each was sent away with relatively-modest bequests.

Yet, for some reason, Red retained a special interest in his grandson, Jason (Drew Fuller), an irresponsible playboy who had been frittering away his future, just living off a trust fund. So, before his demise, the family patriarch recorded a videotape in which he specifically addressed the spoiled brat directly, offering the lazy lad a dozen “Gifts” leading to an “Ultimate Gift.” To receive that grand prize which he anticipates are his grandfather’s millions, the underachieving ne’er-do-well is ordered to follow a set of detailed, step-by-step directions. 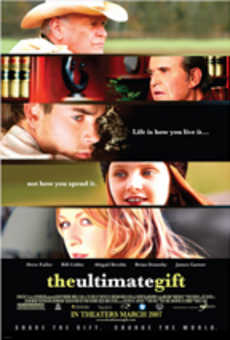 But what Jason doesn’t know is that these so-called “Gifts” are actually a set of spiritually-oriented tasks designed to help him become a responsible and caring man who understands what really matters in life. Because he wants the money so badly, he agrees to the initial assignment, which involves immediately boarding a plane bound for Houston where, only after landing, does he learn that the first gift, The Gift of Work, calls for him to do a month’s worth of manual labor.

Thus begins the very meaningful journey of self-discovery which comprises the core of The Ultimate Gift, a touching tale of empowerment based on the best-seller of the same name by Jim Stovall. Stovall’s own personal story is equally inspirational, as he has surmounted the challenge of total blindness to become a champion weightlifter, an award-winning-writer and a motivational speaker.

As the movie’s plot thickens, Jason is again and again sent out into the world on another adventure, whether to make one true friend, to save a person with a real problem, or to perform some other selfless act. Along the way, he is lucky enough to mature and to find real romance with Alexia (Ali Hillis), a single-mom who is struggling to save the life of an adorable daughter (Breslin) dealing with leukemia. Eventually, The Twelve Gifts of Work, Money, Friends, Learning, Problems, Family, Laughter, Dreams, Giving, Gratitude, a Day, and Love enable Jason to experience the epiphany needed to earn Gramp’s Ultimate Gift. 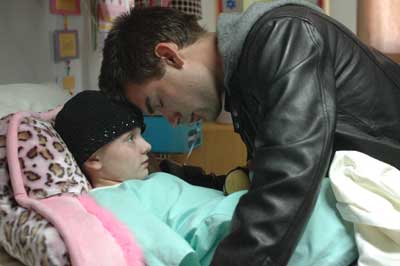 The movie marks the sophomore release by 20th Century Fox’s newly-launched Fox Faith division, and was directed by Michael Sajbel (One Night with the King), who assembled a stellar cast which includes Oscar-nominees Abigail Breslin and James Garner, along with Lee Meriwether, Brian Dennehy and Bill Cobbs. This modern morality play is wholesome, family-oriented fare for those interested in instilling old-fashioned values in their kids. Though the subject-matter might get a bit too grim, in spots, for the younger tykes to handle, the picture is otherwise highly-recommended as a refreshing antidote to the shallow materialism being served up by the typical, escapist Hollywood fantasy.

The Ultimate Gift is perhaps predictable, sentimental and sappy, but who cares, when it also oh so effectively delivers the salient message that much is expected of those fortunate enough to have been born blessed with so much.

Check out an interview with Judyth Piazza and Drew Fuller(Jason)