After dumbing down for Knocked Up, Katherine Heigl returns for more screen punishment at the hands of crude male jerks, giggling her way through The Ugly Truth while displaying her exceptional talent for holding on to her female dignity as the designated deformed hottie, by a thread. Turning up once again as a neurotic, upwardly mobile and oddly gorgeous but luckless in love television drone, Heigl seems most challenged in this role, not with figuring out men, but pretending that she’s not capable of roping one in.

Directed by Aussie Robert Luketic (Legally Blonde) and written by no less than three women (Nicole Eastman, Karen McCullah Lutz, Kirsten Smith) The Ugly Truth stars Katherine Heigl as Abby. She’s a manless workaholic Sacramento television news producer whose idea of cyber-date foreplay, is doing a background check on the guy and presenting him with a checklist of talking points over dinner.

When her show’s ratings plummet, Abby’s boss informs her that the family oriented content will have to be spiced up more than a little by adding Mike (Gerard Butler) to the schedule. Much to her dismay, not only is Mike a vulgar womanizing ‘manwhore’ and proud, but his insanely popular segment The Ugly Truth, thrives on sexually dissing and grossing out the more prim segments of the female audience. 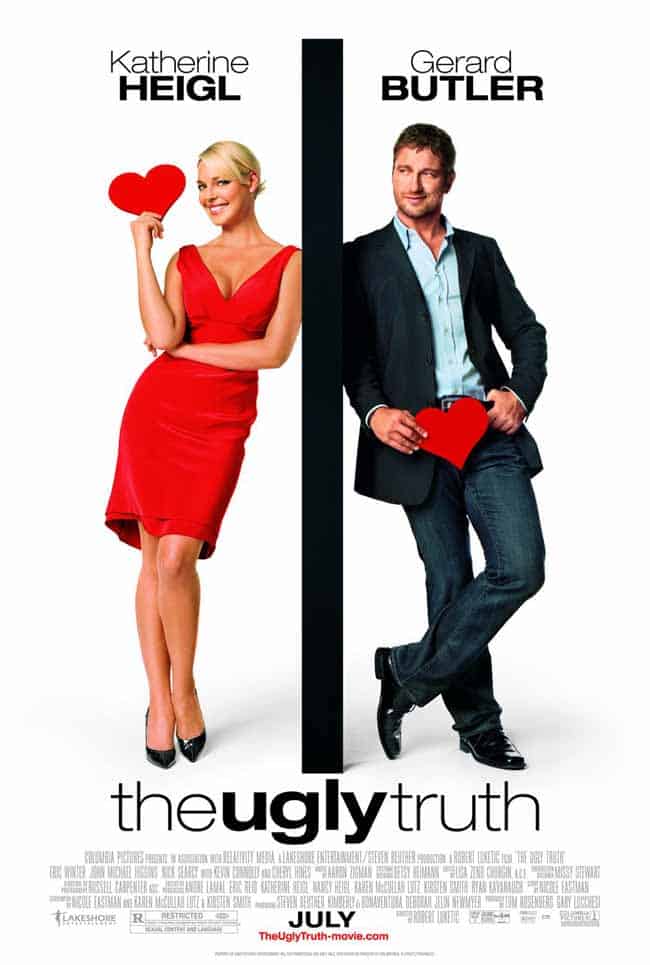 Stuck with an offer she can’t refuse, Abby holds her nose while establishing tentative peaceful coexistence on the set with the macho menace. But Mike is soon spying on her love life, such as it may be, and ends up playing stud matchmaker by offering advice on how to nab that hunk neighbor with a medical degree (Eric Winter) that she’s had her eye on. Staking out the scenes of premeditated seduction like roving reporters on location, the mutually repelled pair exchange notes via walkie talkies on the art of flaunting yourself like a sexual tornado, and shopping for slutwear. There’s also a really unfunny vibrator lined underwear wardrobe malfunction vignette over a corporate dinner.

With a too-little-too-late, tacked on looking for love not lust moment wrapping up these post-teen Superbad style grossout proceedings, Heigl attempts sexual humiliation damage control by declaring ‘I have not been myself the whole time.’ Unfortunately, we hear you.