‘The Town’ refers to Charlestown, Boston, a place where fathers proudly mentor their sons to follow in their footsteps, which mostly lead to the local jail, but at least the sentiment is there. And in this film, so is everything else, including realistic characters, emotionally charged car chases and a story that turns the tension on and off like a conductor toying with his orchestra, but instead of a baton he’s using an AK47, which makes it a pretty lively concerto. 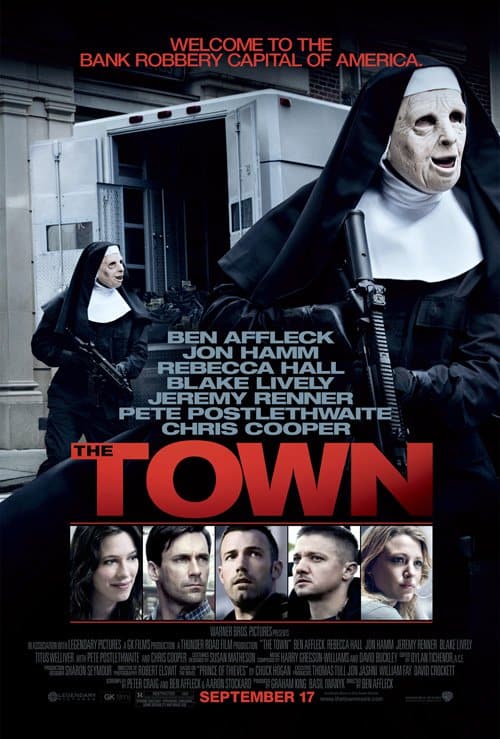 The dialogue in this film is sharp, convincing and so earthy the writers must have spent a lot of time with actual felons to be able to capture such realism. There is one scene when Jim tells Doug that he can’t face going back to prison, so if the heist goes wrong, “I’ll hold court on the street.” These six words clue us in on the character, conjure up images, add to the tension and get us to silently agree that some things are best done at gunpoint. This is brilliant writing.

Other characters don’t fare so well, like the unconvincing ‘Don’ of The Town, who lacks a commanding presence, and John Hamm, who plays his FBI role as he plays his role in Mad Men, which makes us wonder if that’s all he’s got. The Boston accent is occasionally impossible to understand and the events between John Hamm and Jim’s sister, which have huge impact on the story, seem very unlikely but, at the same time, inevitable, as age and treachery will always outsmart youth and cocaine.

This is a film about escapism, depicted each time Doug escapes from his latest heist and by his inner desire to escape from Charlestown which, when you’re born with your expectations in the basement, is a tough call. He is a tortured soul and appears to be as much of a victim as the people he robs, and sometimes it’s as if we’re watching him through the prongs of a fork, already behind bars, destined to only see the sunshine from inside the exercise yard.

Robbery on this scale has largely moved to the internet, so high tech is necessarily ignored in this film, but in the days when banks were prime targets I always thought it was strange that they didn’t let customers in one by one. But what is even stranger is the fact that they leave their doors wide open and chain their pens to the counter; with that kind of logic, no wonder they kept getting robbed.