Even the most random killing spree generally has a point, whether it’s a bad childhood or a bad day on the part of the perps. But the bleak and, yes, pointless slasher fare The Strangers, seems to feel otherwise. A weirdly conceived presumed showcase for stars Liv Tyler and Scott Speedman, Bryan Bertino’s empty-headed sadistic home invasion thriller sits up on the screen like a tacky house of horrors without a shred of a story in sight.

Tyler and Speedman are unhappy yuppie couple Kristen and James, though we never actually learn why. Returning late one night from a wedding reception to their secluded sumptuous home, Kristen dumps James, even as her presents her with a literal bed of roses as a romantic gesture. After drowning his sorrows in what appears like a gallon of ice cream at the kitchen table, James departs. 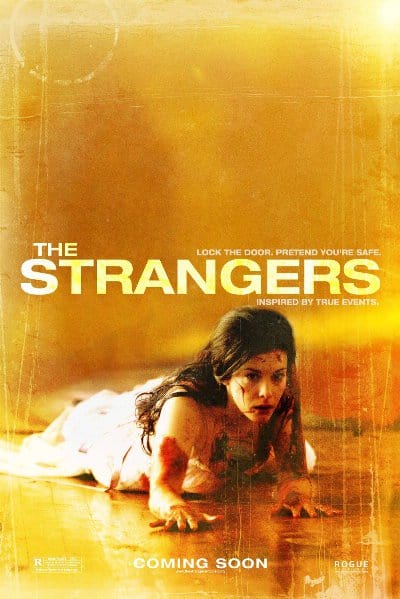 Meanwhile, a masked girl ghost billed as Dollface (Gemma Ward) keeps knocking persistently at the front door, demanding to speak to someone who doesn’t exist. Eventually Dollface’s pals inexplicably penetrate the home, including Man In The Mask (Kip Weeks), an older creepy gent who looks like his head is tied all around with some dirty underwear, while he wheezes a lot and carries a big ax. Which leads Kristen to dash outside at one point, and run into a tree. When James returns home after Kristen makes a frantic call to him on her cell phone, the two are terrorized by the masked mischief makers who lurk in all sorts of corners of the house playing hide-and-seek and turning on loud country music, before deciding it’s time to seriously kill somebody.

There’s far less suspense around what these masked maniacs are doing in this home, than what Tyler and Speedman are doing in this movie in the first place. Or, for that matter, why nobody gets the idea to dial the police, or why such a lavish McMansion never got around to accessorizing with burglar alarms. As for whoever remains standing by the end without a clue, they may have disappeared and taken the final pages of the script with them.