If Hollywood is to be believed, world history no matter where, nearly always plays out as a backdrop to the individual lives and personal preoccupations of glamorous white people. And Roger Spottiswoode’s The Children Of Huang Shi does much to reinforce those distortions.

The title of this WW II drama as it plays out in battle-scarred China back then is particularly misleading, as the young orphans in question are barely individualized, secondary characters. This, while real life British journalist George Hogg, who helped rescue them, is front and center, touching on everything from his awakened paternal instinct to his sex life.

The story unfolds in war-torn 1930s China, where it was filmed, as the Japanese army invades and occupies the land, terrorizing the country and massacring civilians. Hogg (Jonathan Rhys Meyers) is a young British rookie reporter dabbling in the high life of a decadent Shanghai European enclave. When the Japanese invade Nanjing, Hogg is recklessly determined to cover the story by any means. Which leads him to pose as a Red Cross worker transporting medical supplies to the area.

When Hogg is captured by the Japanese and nearly executed more than once, he’s rescued by a Chinese communist guerrilla, Chen (Chow Yun Fat) in league with a resourceful, unusually self-confident fetching American nurse, Lee (Radha Mitchell), who seems to breeze through battlefields like she’s strutting down a runway.

A take-charge, bossy Lee makes Hogg an offer he can’t refuse as an at-risk foreigner, assigning him to oversee a dilapidated, rat-infested orphanage for boys. But the Japanese are soon closing in, along with Chiang Kai-shek’s Chinese nationalist forces from another direction, as they prowl the countryside kidnapping boys to serve as child soldiers. So Hogg leads his young charges on a treacherous journey to safety, across mountains and desert terrain. 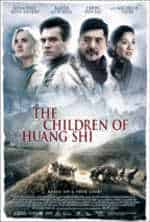 Somewhere along the line in The Children Of Huang Shi, Spottiswoode regrettably opts to simply forget about this momentous period of history, and focus his lens instead on the microcosmic world of these white characters’ intimate lives. Including tensions brewing between the reporter and the revolutionary, not about politics, but over this temptress doper nurse hooked on opium who could care less about current events, and with her own rotating sexual desire for both of them.

And the orphans – remember them? – pretty much get the typical colonialist treatment as movie characters, generally reserved for people of color around the world. Which means essentially that they’re viewed through movies, no matter how young or old they may be as, well, children. Casablanca meets the white man’s burden, and doesn’t amount to a hill of beans.