Though mixing espionage and family values, as in unraveling the roots of dysfunctional behavior among a bratty brood of siblings may be a stretch, Jackie Chan makes the most of it in his latest caper targeting unruly kids, The Spy Next Door. Borrowing the retro-myopic geek look from Clark Kent to conceal his CIA macho persona, Chan does stressed and lovesick simultaneously, warding off Russian baddies while getting into wooing a next door object of matrimonial desire.

Chan is Bob Ho in The Spy Next Door, a jaded US government sleuth who wants to retire and assume his nerdy nearsighted cover full time, in order to take on a new identity as family man instead of company man. Ho has set his romantic sights on neighbor Gillian (Amber Valletta), a single divorced mom. But Amber has three offspring from hell who make tracking down the enemy on a regular basis seem like a no-brainer in comparison. 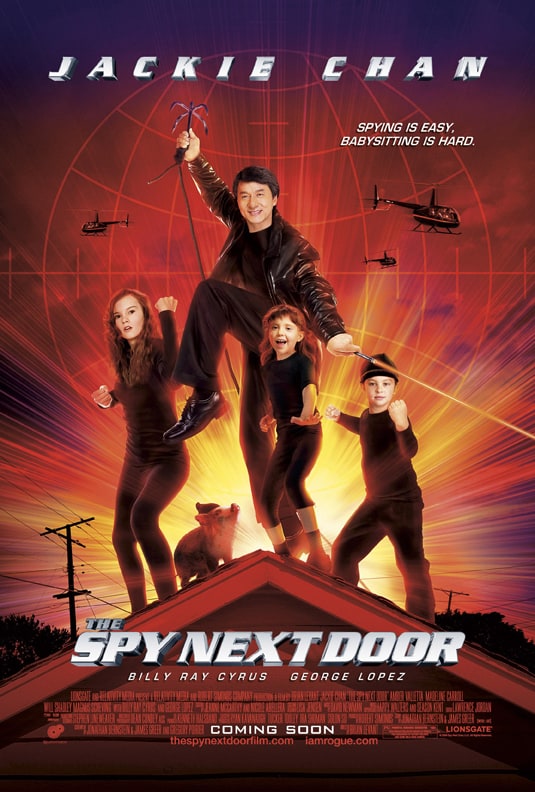 And since Gillian is willing but has made it clear that Ho’s marriage proposal is strictly a package deal, he’s stuck with figuring out how to win the affection as well, of this hostile homegrown kid posse who’d rather do foster care, and are out to make his life as miserable as possible. So when Gillian is summoned out of town to tend to a sick relative, Ho offers to take up the challenge of gaining the affection, when not pacifying the resentful trio of terrible siblings. At the same time, there’s of course a gang of menacing spies in town from Russia, bent on going toe to toe with Ho over a top secret document sequestered in cyberspace.

Seemingly never too old to defy gravity Chan is up to mostly his same old tricks in The Spy Next Door, with a couple of new ones added to his repertoire. Like wielding a pet turtle as a deadly weapon, stuffing an airborne tot into her pajamas upside down, and singing bedtime kid lullabies in Chinese. And though his girlfriend remains adamantly skeptical about Ho being quality dad material, Chan gets points here for convincing the movie audience otherwise, just for sheer persistence and determination in connection with his aspirations to instant fatherhood.

But the undercover supersized fiendish Eastern Europeans after God knows what, are another matter, simply too archaic and clownish to care about as they pursue their demented mission to seize downloads to die for. While an unfathomable conspiracy in the extreme following detente with Russia long ago, is so over the hill by now. And a comically defanged Robert Lopez along with a ho hum cameo by Miley Cyrus’ dad Billy Ray as a supremely cordial laid back sidekick spy, don’t help matters either.