Tossing together hobgoblins and home-alone latchkey kids, The Spiderwick Chronicles is into a fantasy match between children without male role models around, and creature figments of the imagination that scare them most in the absence of adult supervision. Director Mark Waters switches it up from his earlier impressive brats and spats fare, Mean Girls and Freaky Friday, to give the younger demographic a chance at some boy and girl savior daydreams on screen.

Freddie Highmore is a two-for-the-price-of-one set of look-alike but behavior-opposite twins, Jared and Simon Grace. Their frazzled mom (Mary-Louise Parker) has packed the kids off to a remote creaky mansion, when their father leaves home. Jared is resentful and blames his mother for the fractured family, while older teen sister Mallory (Sarah Bolger) is constantly on his case to knock it off and cut mom some slack.

Meanwhile, the house in question that once belonged to the family’s great-uncle Arthur Spiderwick (David Strathairn), a widower who disappeared under mysterious circumstances years ago, seems to have a decided mind of its own. And Spiderwick’s only child Lucinda (Joan Plowright) was confined to a nuthouse for the rest of her life, after insisting that dad was whisked away by supernatural creatures.

When Jared comes upon his great-uncle’s secret Chronicles tome tucked away in an attic overrun with weird critters roaming about, an enormous array of both domestic and wildlife miniature monsters alike – including the fearsome and grouchy shape-shifting hobgoblin honcho Mulgrath, voiced by Nick Nolte – are called into battle against the humans. And the pushy pests prepare to stage a home invasion for possession of the book. Seth Rogan also turns up for a bit of comic relief, as the voice of Hogsqueal, a furry kid ally freed by by Simon from goblin captivity. 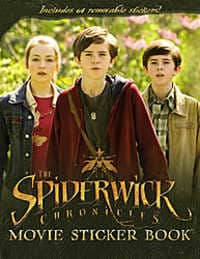 There are all sorts of enchanting moments that fill this essentially child-friendly, scary-lite movie, such as flowers with faces that turn into chirping fairies, a dutiful bird jetting the young adventurers to otherworldly realms, and a spyglass that see everything. And the violence is thankfully of the mild sort for a change, consisting in good part of culinary warfare counting cookbooks, baggies of tomato sauce and a dash of salt here and there, as instruments of battle.