An unsavory fusion of perhaps TV’s American Idol, Brother From Another Planet and Dr. Jekyll and Mr Hyde in reverse – that is, Hyde resisting release of his better half – The Soloist is further evidence, following Kirsten Sheriden’s patronizing August Rush, that UK directors don’t have a clue about issues of race, class or music in this country, and should maybe not be allowed near American movies again. The second big film about Clark Kentish newspaper superheroes within a week, The Soloist and State Of Play may also be part of a trend of Hollywood applying CPR to that increasingly extinct print media, which happen to be a major source of promotional advertising for their films, who knows.

Jamie Foxx, who is no Ray Charles in The Soloist with decidely unimpressive music that is nothing to write home about, plays real life self-taught, eventual Julliard prodigy cellist turned LA homeless psychotic, Nathaniel Ayers. When LA Times star reporter Steve Lopez (Robert Downey Jr.) crashes his bike and sustains a head injury causing him to go into existential crisis mode, he is also struck with a sudden obsession to save the life and art of this paranoid loner he encounters by accident under a freeway overpass. That is, by writing a series of stories about him, whether the barely intelligible lost soul likes it or not. The newspaper columns eventually morphed into the journalist’s 2008 book, The Soloist: A Lost Dream, An Unlikely Friendship, And The Redemptive Power Of Music. 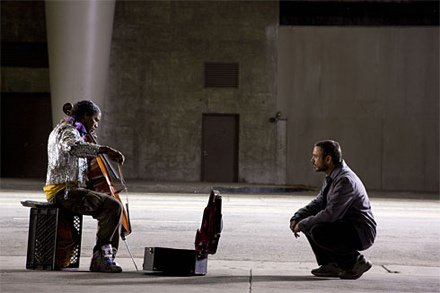 Now while we’re on the subject of talent, why is Downey playing a Latino in a movie, when there are so many gifted unemployed Latino actors out there, especially during this current economic crisis. Okay, so Downey may think he’s on a cross-cultural roll after his tasteless black minstrel stint in Tropic Thunder, but let’s not get carried away, bro. Though even worse in The Soloist, is British director Joe Wright’s attitude regarding African Americans and music. Best known for serving up ruling class drawing room dramas on screen like the deplorable, cry fake rape Atonement and Pride & Prejudice. Wright’s perception of black music – which happens to be America’s own homegrown classical music – is that it doesn’t measure up at all to Europe’s own rarified ‘good music’ classics. In The Soloist, black music is simply ignored or in other instances rudely displaced. In one scene, Nathaniel as a child creatively and emotionally barricades himself away in the family basement, in order to bliss out on European music while tuning out the melodies of his own culture upstairs. And in a final scene, the other homeless at his shelter are clearly dancing to black music, but the muted scene is overlayed with a European classical music soundtrack.

Which brings us to the subject of homelessness in this movie. While the film August Rush depicted those unfortunates as primarily pathetic, when not selflessly devoted mammies to the young white protagonist prodigy, in The Soloist, Wright puts them on display as unpalatable wallpaper – ‘hustlers and thieves’ who are dangerous, threatening and animalistic, or disturbed, selectively the most physically grotesque train wrecks among those he rounded up, but wallpaper nevertheless. Does Wright actually believe on some subconscious level, that the homeless are some sort of inferior genetic mutation. Except for, that is, the rare genius among them, who is the only one worthy of being rescued from their midst, as well as saved from himself. This of course, is nothing new in movies, where ghetto characters deemed exceptional, more likely than not are given the task of escaping their own cultural roots as their major bid for success in life.

Several items are eventually negotiated in The Soloist, including a garish Beethoven for dummies interlude during which traditional European music is conveyed through primary colors leaping about on screen, get it; Nathaniel’s insistence that Lopez show some respect for a grown man and start calling him Mister Ayers; and Lopez himself fending off a growing raccoon population with strategically located bags of coyote urine on the front lawn. What’s missing among these trivial pursuits, is any recognition in this film of the impact of poverty and racism on homelessness and mental illness, or why any of this even exists in supposedly the most prosperous nation on earth.

Downey puts some polish on his usual sarcastic fatalism routine here, while Foxx reprises his perfectionist instincts for those fast forward soliloquies. And while I’m not even going to get into the persistent habit of multimillionaires playing, or rather play acting poor people on screen, Foxx is noted for delivering a performance of excessively crude, clownish affectation and scary caricature. And Wright may as well have brought in some extra bags of that coyote urine to spread about the inner city sets in this movie, to elaborate on his apparent feelings about race and poverty.

On a side note, The Soloist ends with an epilogue citing 90,000 homeless on the streets of LA. Surely there are far more since this movie was made.