As young children, the McCrae sisters, Gail (Deborah Mailman), Julie (Jessica Mauboy) and Cynthia (Miranda Tapsell), formed a promising singing group with their cousin (Shari Sebbens). But the ensemble barely got off the ground before Kay was seized by the authorities while recuperating in a hospital.

You see, the girls were growing up in Australia at a time when the law allowed fair-skinned aborigines to be taken from their mothers and placed with Caucasian families so they could be raised in accordance with the “White Ways.” Consequently, half-caste Kay had virtually no further contact with indigenous culture or any of her relatives over the next decade. 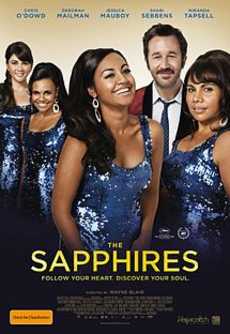 By 1968, however, Gail, Julie and Cynthia were old enough to track their cousin down, whereupon they encouraged her to run away with them on the spot. And it wasn’t long thereafter that the reunited foursome entered a local amateur competition as a Country music act.

Although they underwhelmed the audience that day, they did impress Dave Lovelace (Chris O’Dowd) who recognized their potential, assuming they would be willing to change their repertoire to popular Motown tunes. In short order, he became the quartet’s piano player, conductor, choreographer and manager, whipping his diamond in a rough into Australia’s answer to The Supremes before signing them to perform for the troops over in Vietnam.

Based on the stage play of the same name, The Sapphires recounts the band’s harrowing, real-life experiences upon arriving in Southeast Asia during the bloody Tet Offensive. The movie marks the impressive feature debut of aborigine Wayne Blair, a gifted actor-turned-director who does a remarkable job of subtly recreating the political climate of the turbulent Sixties.

For instance, he effectively employs the iconic clip of Muhammad Ali refusing to serve in the army (“No Viet Cong ever called me a [N-word].”) to convey the mounting minority opposition to the conflict. Nevertheless, blinded by a combination of naivete and the pay, our hapless heroines find themselves in the middle of a war zone with little preparation for the unspeakable horrors they are about to witness.

With no choice but to make the best of a bad situation, they proceed to put on a number of very well-received shows, as the tour takes them closer and closer to the frontlines. Amidst the insanity, they somehow find time for reverie, reflection, and even a little romance.

A well-deserved tribute to four Aussie lassies who risked their lives to entertain the boys.

To see a trailer for The Sapphires: