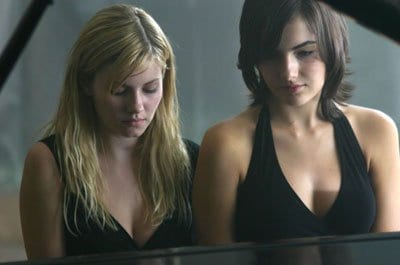 After her mother’s recent death, Dot (Camilla Belle), a deaf mute, was welcomed into their home by her godparents, Olivia (Edie Falco) and Paul (Martin Donovan) Deer. The Deer’s daughter, Nina (Elisha Cuthbert), however, was not so enthusiastic about the orphan’s adoption. Afterall, Dot was the same age and would now be attending the same high school, and her homely looks and depressed demeanor would not reflect well on Nina, a popular, perky cheerleader.

More importantly, the Deer household has, for years, been hiding a sordid secret from the world which has just been aching to come screaming out of the closet. And the presence of this silent observer provides the catalyst for them to deal honestly with the truth once and for all. For, underneath Nina’s phony, superficial persona, lurks a troubled soul as deeply disturbed as Dot appears to be.

This is the intriguing scenario at the center of The Quiet, a taut psychological thriller directed by Jamie Babbitt. On the surface, the story initially seems like your typical bitchy blonde-versus-ostracized newcomer teensploit, but fortunately, that familiar scenario is merely the point of departure for the exploration of a more sobering set of circumstances.

Winding its way ever so deliberately towards an alarming resolution, The Quiet succeeds in imbuing the air with an increasingly-ominous sense of foreboding, The resolution turns on a couple of twists, one of which is relatively easy to anticipate, the other a bit of a shocker. It’s all about female empowerment, if not exactly a feelgood flick.

A stark study in contrasts which effectively highlights the pitfalls, long-term, of living in deep denial.