Hinging on the far fetched premise that if you put two people with zero chemistry in a room together long enough, green card marriage scam or not, they’ll inevitably fall in love with each other, The Proposal wouldn’t seem to have far to go from point A to B, and doesn’t. And especially not likely to sit well with the anti-immigration crowd either, the movie sets up a green card marriage of convenience contract turned crazy in love silliness, between two workmates who can barely stand one another to begin with.

Sandra Bullock does her frantic best with exceedingly thin material, and playing blatantly against type with her instinctively sweet and soft spoken persona, as a ferocious ball-busting dragon lady executive ruthlessly draining the self-esteem out of her assistant at the publishing house where they work. Bullock is Margaret, aka Satan’s Mistress, a boss from hell who delights in tranforming her meek but quietly resentful underling Andrew (Ryan Reynolds) basically into her nine to five and beyond bitch. 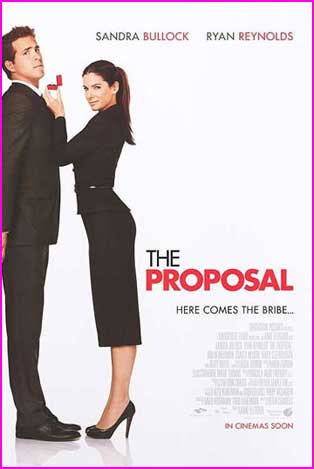 When Margaret, a Canadian citizen, learns that she is about to be summarily deported for lack of a green card, the scheming shrew insists that a shocked Andrew marry her ASAP, an assignment not exactly in the routinely persecuted assistant’s job description. To add validity to the marriage plot and elude a highly suspicious INS investigator, the mutually loathing pair takes off for the weekend to visit with Andrew’s filthy rich family up in rural Alaska. Where his really annoying Grandma Annie (not so Golden Girl here, Betty White) indulges in a repetitious mockery of Native American culture and customs. All of which in effect, renders the couple in extended infatuation denial, significantly more palatable in comparison, believe it or not.

Directed by Anne Fletcher, The Proposal does have its occasional odd moments. Including The Office’s Oscar Nunez multi-tasking in that tiny fishing village with apparently huge employment vacancy problems, as a paunchy male stripper when not operating the local grocery store and performing marriage ceremonies. But Margaret’s insistence to her squeamish forced fiance that ‘we’ll be happily divorced in no time,’ is something you may wish for as well, as you sit through this monotonous movie.