One of the most problematic if not strange endeavors for a movie critic, is to critique another one. Compounding that puzzling situation with Sophie Fiennes’ The Pervert’s Guide To Cinema, is that the documentary’s sole human subject, Slovenian shrink monologue maven Slavoj Zizek, is neither a film critic nor, well, a pervert. Though we’ll reserve judgment for now on that particular matter, since perverts rarely boast about their inclinations.

Divided into three sections and going on for far too long at 150 minutes running time, The Pervert’s Guide To Cinema impresses with a four star rating for the first third, but then increasingly fizzles out with repetitive and often meaningless psychobabble up to the finish line. Director Sophie Fiennes’ gabby soliloquist is engaging and charismatic enough. And her imaginative and frequently comedic use of film clips and settings, placing Zizek at landmark scenes of the cinematic crimes in movies – like Norman Bates’ cellar in Psycho, boating out on the water locale for The Birds, and Vertigo’s ominous interiors – perpetually amazes as the narrator playfully kicks down that fourth wall. But Zizek’s seemingly frantic and rather insular compulsion to continuously outdo himself with a snippet of enlightenment per minute, progressively wears out its welcome. 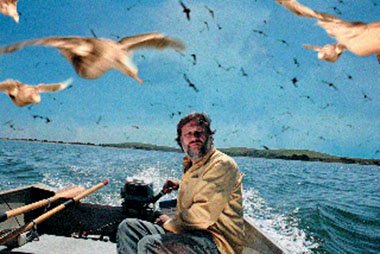 For one, the pop therapist showman’s approach to the creative process at work in movies, seems a bit naive. Are filmmakers really only fixated, whether consciously or not, on probing their own personal demons and shedding light on the meaning of existence for the rest of us? Though this may have been true to some degree with the older films Zizek dissects in the first installment, to subsequently leave out entirely the more than conscious and highly manipulative function of movies as a consumer product with its own fixations on fame, glory and the box office, is utterly simplistic, if not disingenuous. To what extent, therefore, is Zizek’s projection of his own obsessions on movie content a factor here. Paging the shrink’s shrink.

Most muddled in The Pervert’s Guide To Cinema, are Zizek’s pronouncements on female desire from his own male point of view, which are simply wrongheaded when not offensive and dabbling in the usual female objectification. And to explore the hypnotic powers of politics by referencing nothing more recent than Hitler or Stalin in films, while giving a pass to the Red Scare infiltration in movies and institutionalized Hollywood Blacklist terrorism that prevailed domestically during the same period, bewilders. Not to mention Zizek’s bypassing of Western imperialism, multinational corporate economic and cultural domination over the planet, and the mass mind control of advertising of which Hollywood is a component, as evidence of a rather narrow range of inquiry that is seriously stuck in the past, to say the least.

It’s possible that The Pervert’s Guide To Cinema may be just the mental and emotional elixir for some, – including Zizek himself, who knows – if that’s your cup of psychotropics. And at a mere ten bucks a pop for 2 1/2 hours of theater therapy, it’s quite the bargain.