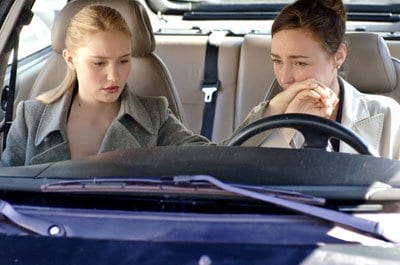 As an adolescent, Melanie Prouvost (Deborah Francois) exhibited enough potential at the piano to apply for admission to a leading music conservatory in Paris. Unfortunately, the gifted girl’s audition was ruined when the chairwoman of the jury, renowned classical pianist in Ariane Fouchecourt (Catherine Frot), thoughtlessly created a distraction by signing an autograph for an adoring fan.

The disturbance caused Melanie to lose her concentration and composure which, in turn, led to her being rejected by the exclusive academy. Thereupon, the once-promising prodigy impulsively abandoned the instrument entirely, resigning herself to the relatively-pedestrian prospects of a daughter born to a couple of butchers (Christine Citti and Jacques Bonaffe).

Fast forward ten years, and we learn that Melanie has recently finished school and is just taking a job at a law firm where she will serve as an intern to Jean Fouchecourt (Pascal Greggory). What neither one realizes, at least at this juncture, is that he is the husband of the rude woman who had put the kibosh on her musical career before it had a chance to blossom.

Next, her oblivious boss takes an interest in his fetching file clerk, and offers her a live-in position as a nanny at his sprawling country mansion located at some distance from the city. Melanie agrees, and Mr. Fouchecourt soon formally introduces her to his wife and young son, Tristan (Antoine Martynciow). 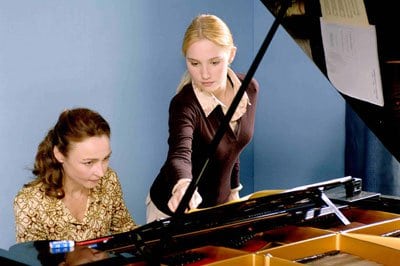 Ariane is too self-involved to notice that she and the new babysitter shared a past. This frees revenge-minded Melanie to worm herself into the Fouchecourts’ good graces ever so gradually.

First, she endears herself to Tristan by becoming the perfect playmate. Then, she agrees to serve as a page turner and shoulder to lean on for the Mrs., who has been suffering from stage fright since an awful car accident. And that liaison leads to a dependency and tender moments between the two which might be misinterpreted as lesbian leanings.

Ever unpredictably, Melanie subtly sets about evening the score in agonizing fashion, making The Page Turner one of those delectable, upstairs-downstairs affairs worth savoring. A suspenseful psychological thriller which rates right up there with the best of the genre.

In French with subtitles