A kind of all in the dysfunctional family royal romp with incestuous tendencies, The Other Boyeln Girl revisits if not reinvents old English history as essentially crafted in the bedroom as opposed to the Tudor period boardroom. That’s more than a little like weirdly theorizing that Bill Clinton’s or John McCain’s alleged extra-marital indiscretions have more to do with the sway of current events than anything else. Which makes for peculiar kinky historical analysis, but pretty steamy pre-tabloid melodrama.

British director Justin Chadwick, who likely cut his carnal teeth on the small screen with Bleak House, assembles a richly textured, dramatically disciplined erotically laced and emotionally taut creation with The Other Boyeln Girl. Scarlett Johansson and Natalie Portman are the Boyeln sisters, Mary and Anne respectively. Following an idyllic provincial childhood at the estate of their parents, aristocrat Sir Thomas Boleyn (Mark Rylance) and his wife, Elizabeth (Kristin Scott Thomas), the sisters find themselves being groomed for fame and fortune to benefit the standing of their parents at the royal court of Henry VIII (Eric Bana). 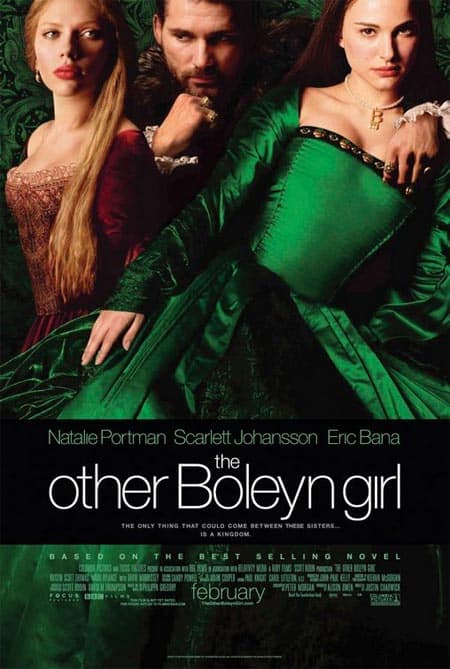 At a time when women, whatever their social position, were perceived primarily as cattle to be traded for the political plots and personal pleasures of men, the sisters receive a rude awakening as their father with apparent early stage-parent proclivities, bids to negotiate their young flesh in a kind of sex slave trafficking, as female bewitching bait, with the very married king in frantic need of a male heir. Thoughtlessly casting his currently barren, older wife Catherine of Aragon (Ana Torrent) aside for these two hotties-in-waiting as if selecting from a menu’s column A or B, the indecisive and rather horny Henry first settles on Mary and then Anne – after Mary becomes a mom and therefore no longer sexually craved as an object of desire by the lusty ruler. In other words, just that other Boleyn girl.

Meanwhile, a quite conniving and already secretly married Anne, plays seductive hard-to-get in the extreme with the playboy monarch, until he will agree to violate Catholic Church doctrine by divorcing his wife, and then marrying her. Seemingly objecting to his perceived wimp status in the arenas of both sex and politics, Henry does a premarital date rape on Anne – possible prophetic domestic violence precursor to her later beheading – in addition to breaking with the Church to enable his divorce and new marriage, all to, well, show who’s boss. 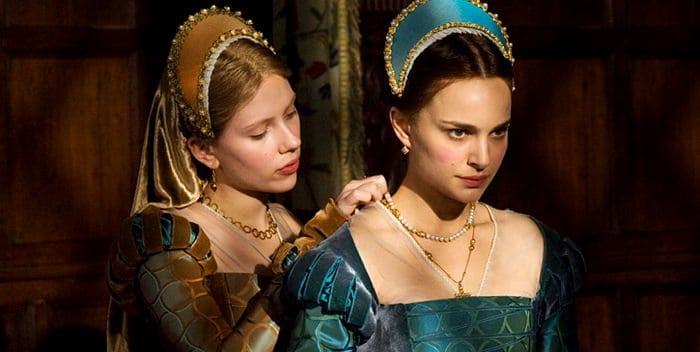 All the sordid court intrigue, nasty sexual skirmishes, repressed passions and imploding desires make The Other Boyeln Girl an absorbing and dazzling surface spectacle. And with a deliciously devious undercurrent of less admirable human instincts dressed up in a thin veneer of pomp and finery, concealing extremely bad behavior.

What the film omits entirely, in its obsessive focus on sex as a driving force in history, is Henry’s break with the stranglehold of the Catholic Church and declaration of the independent Church of England, as a necessary component to all the unimpeded nation building and pursuit of England’s colonial empire globally, with the divorce issue as pretext. But such technical historical details don’t quite make for this sort of elegant and treacherous bodice-ripper cinema. All of which leads up to that accidental prequel, namely Henry’s and the executed Anne’s offspring Elizabeth, who grows up to be by chance the future Cate Blanchett, in that queen’s own costume drama sequel bearing her name, just out on DVD.